So here we are in Mexico for the first of two Georgia Aquarium research trips this summer.  This is the logistically simpler of the two, for exciting reasons I am not yet at liberty to discuss.  On this one we are focusing on photo ID as part of the ECOCEAN project.  Yesterday was our first day on the water and it did not disappoint.

We headed from Cancun out to the afuera – the worlds largest aggregation of whale sharks – around 9, a bit later than usual.  It’s a fair way out, over 20  miles as the crow flies.  Although the water is blue and clear, it actually teems with life because a nearby upwelling zone brings nutrients to the surface and makes for a tremendously productive regional ecosystem.  The whale sharks gather to feed on tuna spawn, which drift in translucent abundance among the sargassum and (unfortunately) bits of plastic.

We found the whale sharks fairly easily: you just follow all the other boats, which gather like some sort of maritime jamboree a quarter of the way to Cuba.  We count no less than 49 boats, each disgorging ecotourists that swim excitedly among the disinterested animals.  But their stamina is low and the ecotourists soon peter back to shore, leaving us with a few hardcore photography folks and, eventually, we are left completely alone with around 80 whale sharks.

Some animals power through the water, challenging you to keep up (don’t bother, they’ve got 200M years of evolutionary advantage!), while others feed in tight circles and yet others hand vertically, affording us a good chance to get the shots we need. 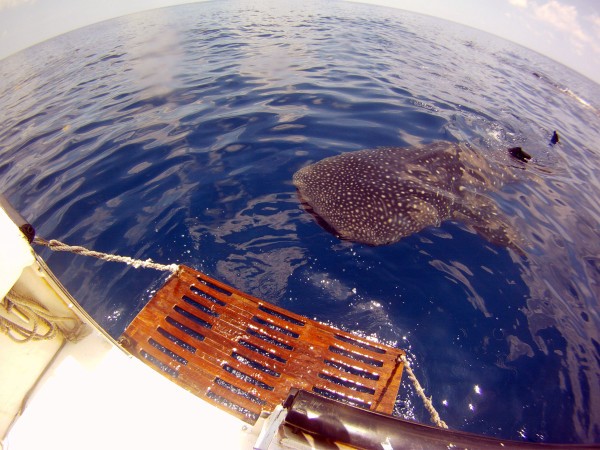 Come in and play!

The whale sharks have friends.  Like the big man on campus, each whale shark is attended by a bunch of hangers on: both social and literal parasites that rarely leave their shark’s side except to dart over and investigate whether we might have something more to offer, before disdainfully returning to their hosts when they realise that we do not.  We see two species of remora: the elegant striped remora Echeneis naucrates and the ugly dumpy common remora, Remora remora, clustered at the edge of the gills, on the tail, around the vent (waiting for what, exactly?) or clinging to the shark’s chin like a slippery soul patch.  I am lucky to see a leucistic striped remora, whose body is pure white from the gills back: damn my slow camera hands!  Handsome rainbow runners (Elagatis bipinnulata) dart around in twos and threes, sometimes turning the tables to shadow the remoras on their brief sojourns away from their hosts.  More than normal we see a lot of blue runners, Caranx crysos, loosely following whomever is closest, and at one point a large formation of cownosed rays (Rhinoptera bonasus) glides by in the depths below.  Just for a moment I was tantalised by the sight of a small school of little tunny (Euthynnus alletteratus) that burst out of the blue and were gone just as fast.  These are the local “bonito” on whose eggs the sharks come to feed, although noone has yet documented the spawning itself.  Even a floating plastic drum we retrieve for more appropriate disposal is home to bunch of triger fish and a tenacious little chub.  Above it all, a pod of energetic spotted dolphins careens around the aggregation, hurling themselves at the sky like adolescent boys trying to outdo each others exuberance. 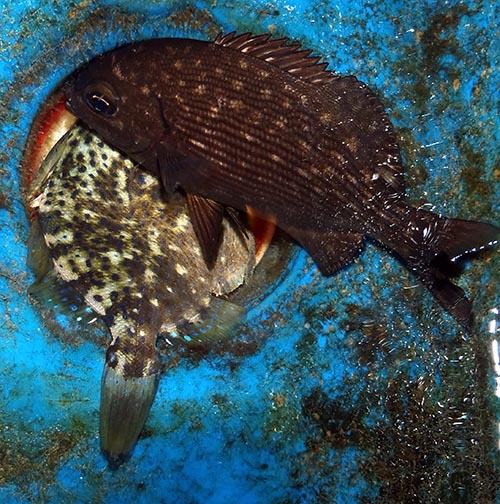 Sorry fellas, try some Sargassum, this plastic's going in the bin

We shoot until we can swim no more, and then we shoot some more and then it’s time to call it a day.  We have drifted over ten miles from where we started, so it’s time to make the long trek home.  This is just the beginning; ahead lies hours of image processing and data analysis, but its pretty easy to motivate yourself for that kind of work given the subject matter.  Besides, it allows time for the sunburn to abate before we do it all over again.

One Reply to “Hello old friends”