We have a long history of being HUGE fans of the “bone-devouring zombie worm from hell”. Osedax species were described less than 10 years ago and much work on their reproduction, evolution and ecology has yielded incredible insights into a unique and bizarre way of life!

Early on, Osedax was only found on whale bones from carcasses that sank into the abyss. It wasn’t long before researchers started a long and productive string of experiments placing whale bones (and the entire carcass of stranded whales) out in the deep sea to study the evolution of the community supported entirely on dead whale.

Footage of whale fall succession in the deep sea produced by the lab of Dr. Craig Smith, University of Hawaii. 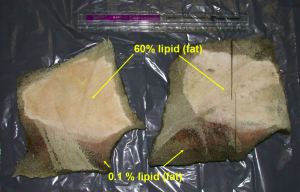 Immediately, and with good reason, it was thought that Osedax was clearly a whale-fall specialist. The core of whale bones consists of a matrix rich in lipids – up to 60 percent! – an organic manna from the sunlit heavens. University of Hawai’i researcher Dr. Craig Smith estimates that a 40 ton whale carcass sinking to the deep sea contains about 2 million grams of organic carbon in its tissues and bones (Smith & Baco 2003). For each square meter of the seafloor that the carcass affects, it supplies the equivalent of over 100 years of carbon from the rain of marine snow that falls to the seafloor from dead surface plankton!

Recently, other researchers challenged this conventional wisdom. To characterize the extent of what these strange worms can live on, they started deploying other substrata than whale bones in the deep sea. Initially, Osedax was found living on cow bones (Jones et al. 2008), but the argument was proposed that this was an unnatural environment in the deep-sea and would therefore be of a minscule contribution to Osedax habitat and nutrition. Only a few months later Vrijenhoek and colleagues (2008) replied with a report of Osedax on ungulate bones that were likely galley waste thrown over from fishing or shipping vessels, suggesting:

“With numerous fishing, commercial transport, passenger and military vessels sailing the world’s oceans, we wonder how frequently bones from galley waste might reach the ocean floor. We do not suggest that such bones provide a more bountiful and temporally stable resource for Osedax than large cetacean carcasses, but every food fall may help these bone-eating worms continue to flourish in a world that now has fewer large whales.”

But cows are ungulates… and ungulates – like whales – are mammals. Mammalian vertebrae are generally rich in lipids. A real smoking gun for the specialization of wHaLe BoNe-DeVoUrInG zOmBiE wOrM fRoM TEH ABYSS!!1!! would be to find it happily perched upon the bones of non-mammalian taxa, for instance marine reptiles or fish. Previous studies of fish falls in the deep sea were carried out on time scales likely too short for Osedax to colonize or be detected with imagery. Nonetheless, Glover and colleagues suggested that for most fish or small carcass remains

“… the likelihood of many of the small bones being scavenged or settling into the sediment, suggests that there would be little available bone material left after three to four weeks.”

So like any good scientist out there to prove their instinct correct, Drs. Greg Rouse, Robert Vrijenhoek and colleagues went out to collect data deploying an experimental array of fish bones and calcified shark cartilage into the depths of Monterey Canyon. 157 days later, the array was recovered and lo and behold Osedax had colonized the largest bones! Not only do they appear to colonize any bones and suck them dry of their precious, juicy lipids, but they do it pretty swiftly. 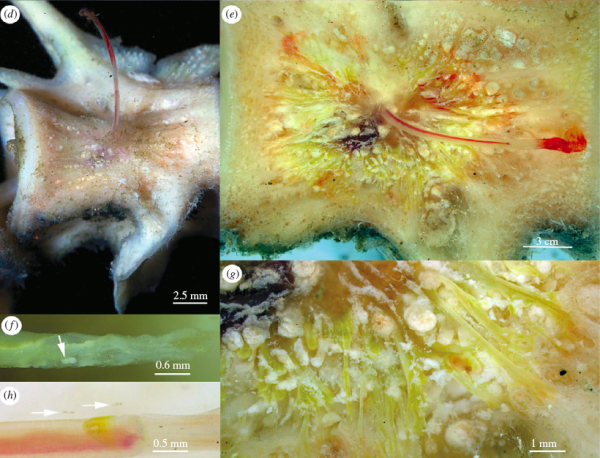 The real kicker is that these fishy Osedax were colonized by 3 different species (2 undescribed, nicknamed “yellow patch” and “nude palp E” <-scandalous!). One specimen of Osedax roseus had already started spawning eggs suggesting that they grow, mature and spawn rapidly after settling on a bone – in less than 7 months. This last point is of particular interest because previous genetic studies have found that Osedax populations are very diverse with high effective population sizes. What this means for the species is that there must be many breeding individuals down in the deep sea.

This finding helps to solve a paradox in Osedax research. How can the worm persist in huge numbers on a resource (whale falls) that is so highly variable in time and space? They would either need a massive reproductive output or the whale-fall habitat would need to be very common. This is complicated by Osedax‘s life-history variables, some known and some not: it must acquire it’s symbiont, grow, recruit dwarf males, mature, convert bone lipids into egg mass and spawn – all while this resource persists. Whale bones may be optimal habitat, but we know from decades of ecological study that animals have trade-offs. Fish bones may be less rich in lipids and persistence of Osedax habitat, but it certainly be preferable to starving to death in the freezing cold, dark, lonely depths!

By colonizing a wider variety of bone types, Osedax opens up many more habitat possibilities and may help explain how in the vast expanse of the planet’s largest (and some might say grandest) environment such an unusual lifestyle could evolve and persist.