Field Museum scientist Josh Drew recently brought to my attention a new and unusual paper describing a world first.  The manuscript by Randy Honebrink and co-authors in Pacific Science describes the first documented attack on a living human by a cookiecutter shark, Isistius sp., and it’s quite an eye-opener.  Cookiecutters are relatively tiny sharks – just 2 feet long.  They don’t eat their prey whole, but take circular chunks out of their flesh, so their common name couldn’t be more apt.  Through a fortunate coincidence, my colleague and the aquarium’s science officer emeritus Dr. Bruce Carlson knows the victim involved in the incident, marathon swimmer Michael Spalding, and Mr. Spalding was kind enough to talk to me about what is surely one of the more unusual shark-human interactions that has ever been documented.

AD: First off, you weren’t taking an average dip at the beach.  Can you tell us a bit about the swim you were trying to do and how it fits into your channel swimming activities?

MS: I am a marathon swimmer and started swimming channels in Hawaii 30 years ago.  Over the years I have completed swimming solo all of the channels between the main Hawaiian islands and have swum the Kauai channel in a relay.  The last channel I swam was the hardest and longest the Alenuihaha,  this channel is 29 miles across at the closest location but for me I had to swim 33 miles to complete the crossing.  On my first attempt I got 10 miles off shore in the black of night and in order for a better visibility connection between boat and kayak escort and swimmer lights were used on the kayak and on the boat to keep in contact.  In the ocean a separation can be extremely dangerous as it is very hard to find a kayaker and swimmer if they get out of contact with the escort boat and that can have very serious consequences that we do not want to experience. In my case the lights attracted squid with in turn created a food chain which the cookie cutter shark was a part of.

AD:  The paper describes your receiving two bites, but one’s memory of dramatic events can be quite different from what you might read in a medical or scientific narrative.  Can you describe what happened as you remember it and what sorts of thoughts were going through your mind?  Surely at the time you couldn’t have known the culprit, so what did you think had happened?

MS:  I was swimming along in perfect conditions.  The wind kicked up a little and I was hoping that it was a local condition that would disappear.  We were on 30 min feeding schedule.  At 8:15 I was trailing the boat by about 80 to 100 yards.  The boat captain liked to run ahead and then go out of gear and wait for me to catch up.  On the previous feeding stop he complained about not being able to see the Kayak and requested we turn on our emergency light so he could see us better.  He also turned on his cabin lights at  the same time.   15 minutes after we turned on the lights and I had my feeding I started to feel squid bumping into me.  I assumed they were squid as they felt soft.  I did not like this at all it worried me.  It felt eerie and was waiting for something more dramatic.  There was nothing I could do at this point but put my head down and do my job.  After the 4th bump I felt a sharp prick just to the left of my sternum.  It was excruciating and I gave a yelp.  As soon as that happened I knew I had to get out of the water and the swim was over.  I reached the front of the kayak and turned off the light and started climbing into a one person kayak.  As I was about to push onto the kayak I felt a hit on my left calf.  I ran my finger down my leg and felt a 2.5” by ¾ inch hole where I had been hit.  I continued getting out of the water with blood everywhere.  We called the boat on our radio and they were on us in a minute.  I got off the kayak and into the boat and they put gauze and duct tape on the bite as the boat charged full blast to Kehei boat ramp.   I was extremely disappointed to have to abort the attempt.  As soon as I could get my wits about me I know it was a cookie cutter bite and the captain also concurred.

The cookiecutter shark was not on my radar as a hazard to watch out for in the channel.  I knew about them but never considered them in the movie credits that I would take into account as a show stopper.  When I got hit the first time I know that all the preparation and planning  was over with my first aborted channel crossing.

AD:  Has what happened changed the way you think about sharks and the conservation issues they face these days?

MS:  Sharks are a part of the ocean and they can sense vibrations from a long way off. in order to complete the Alenuihaha at over 60 years of age you need to pick a perfect day and I waited for 3 months for the perfect day, which would be calm seas with minimal tidal change.  The problem with the perfect day is that your surface vibrations and that of the boat are transmitted over a greater distance than when the surface is turbulent with wind and waves.  This exacerbates the problem of predatory fish.  Sharks are attracted to vibrations when hunting for prey.  By sending out a signal in calm water a shark can detect the activity  a much greater range.

I have always felt that sharks had a place in the ocean and would not intentionally harm them.  I feel that they are the host when we are sharing their space with them when we venture into their territory.

AD:  Did you go back and try the swim a second time?

MS:  I waited 2 years for my second attempt.  The healing process took 5 months and then I had to regain the conditioning that I lost in the healing process.  I also had a number of other things that I had put on hold training for the first attempt that came up on the agenda limiting the amount of time I could commit to training.  Again I started looking for the ideal window of weather  and this time planned the swim to avoid being in the same place in the dark.  I planned the departure for 3 am which would keep me in shallower water in the dark and allow me to land with minimal dark swimming.  At almost the same location as the bit I encountered an oceanic white tipped shark.  They are more feared to me than a tiger shark.  I knew their reputation as a opportunistic hunter and became wary when it showed up on the scene.  I watched it as it came in to get a look and then disappeared only to reappear at my rear some minutes later.  It finally left for good but I was on full alert for the rest of the swim.  The biggest obstacle to completing the swim was getting hit by a Portuguese man of war  5 hours from the end of the swim.  This was very painful and created spasms in my leg and stomach.  I kept swimming and a few hours later the pain subsided.  Three miles from shore in the dark I was bumped by a fish.  This got my speed up and I was thankful it did not return.

What a remarkable story!  What’s so unusual about this is that from the shark’s perspective, this was a successful predation event.  If it had been, as Mr. Spalding points out, a different shark that succeeded in biting him, the outcome might have been much worse.  But due to the nature of the species involved, even a completely “successful” attack was not life-threatening in this case.  Still, I can only imagine the feelings of dread that must have flooded his head and heart, swimming out there in the open ocean at night and knowing that *something* had bitten him.  I guess that’s a large part of the achievement in marathon swimming: overcoming fear of the unknown on the way to achieving an extraordinary physcial feat.  All I can say is, you’re a braver man than I, Mr. Spalding!

Postscript – through a circuitous email conversation about this post, the most excellent Ray Troll shared a sketch of his, done  back in 2001 long before he heard Michael’s story, entitled “when cookiecutters attack”.  Ray has kindly given permission for me to share his sketch here – a DSN exclusive!   If you’ve been living under a rock and don’t know who I mean, get over to his website, because you’re not really a fish-head unless you own at least one Troll T-shirt! (mine is the classic “Fish Worship – is it wrong?“). 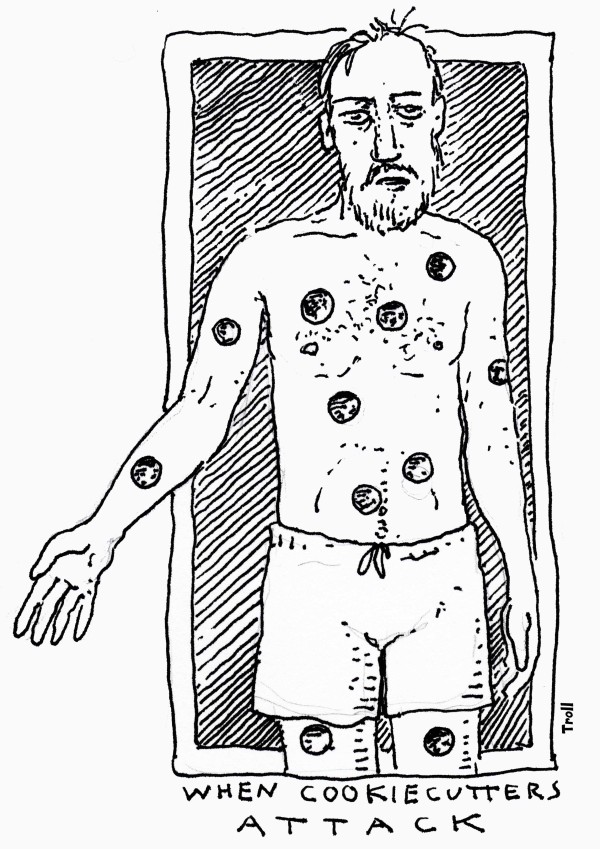