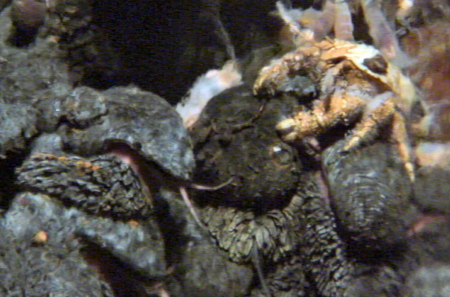 You heard here first people, another new species of Yeti crab may be out there!  Jon Copley just sent this message along.

Well hey, a couple of weeks ago we found yet more yeti crabs out here at vents on the SW Indian Ridge, different in morphology to the Costa Rican seep and southern Pacific vent species (incidentally, K. hirsuta was described from the Pacific, rather than the Indian Ocean).

These boys don’t dance though, unlike the “puravida”s (which does sound a bit like a Ricky Martin song).

As a disclaimer these have not been officially or scientifically described as a new species but rather preliminary evidence indicates the potential for a new species.

Also at this same vent field, the Dragon Vent field, the group found scaly-foot snails in the hottest habitat around the black smokers. 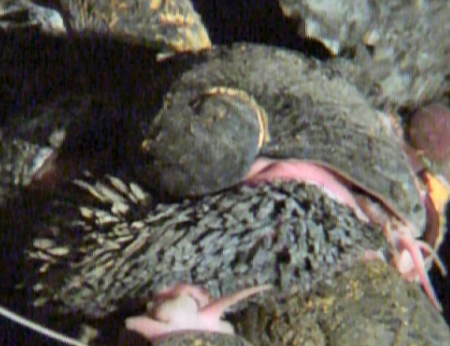 Close-up of a scaly-foot snail

UPDATE: Word from Jon Copley on the potential new Kiwa species is “while their carapace suture patterns etc fit the description of the family and genus, they don’t have elongated, hirsute chelae [shaggy hair] – instead they have rows of dense bristles on their ventral carapace, a bit like a carpet sweeper”