My second week at UC Davis, and I’ve already met Jane Lubchenco. Last night the NOAA administrator gave a public lecture to a packed auditorium here on campus. Although her talk wasn’t particularly beefy, I captured a few interesting tidbits: 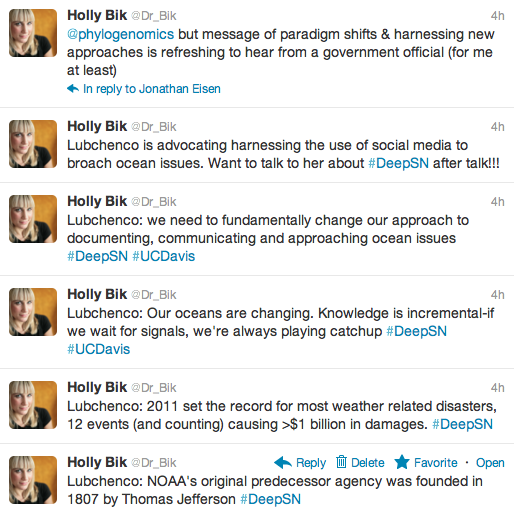 It was refreshing to hear a government official state her steadfast optimism, and urge scientists in the audience to adopt new tools and approaches. To prevent (and effectively cope with) climate change, the public needs to be engaged. This is a new world we live in. She highlighted the importance of social media in driving a scientific revolution.

After the talk I wanted to talk directly to Jane and ask her about social media and online tools. [Sidenote: Afterwards I had to find an empty room and do a little dance – SQUEEEE!] How can we use these most effectively? What should we be doing as scientists?

She basically had no idea. The online world is so new, so untested, and everyone is sitting in the dark. There are no agency initiatives yet poised to harness the power of the internet. She said scientists should use their personality. By default, this has to start with a bottom-up approach.

If that’s the case, how the hell are we going to pull this off?

Blogs and twitter can be the jumping off point, but changing the culture of ocean science has to be so much more than that.

If you love science–and you’re in a position to make a difference–let’s work together to be the marine Steve Jobs. Scientists are busy, but we will always make time for a cause we believe in. Those of us predisposed to communicate (the Deep-sea News Crew) recognize that we must lead our brethren.

Let’s stay positive, be quirky. Bring in the humor. As Kevin noted on his recent chat with Dr. Kiki, a doom-and-gloom message doesn’t motivate anyone. We shouldn’t potray scientists as old white guy authority figures telling you what to do. I’m not your mother. I’m your neighbor, your friend.

Let’s make scientific videos that go viral. Lets teach people about the science in their *homes* and *everyday lives*. Hydrothermal vents are definitely awesome, your average Joe doesn’t run into tube worms on his commute to work. Let’s make people stakeholders in their local communities–their beaches, their coasts, their salt marshes.

To impact society, we must connect some very distant dots. We must bring together scientists, writers, editors, techies, entrepreneurs…the list goes on. At Deep-sea News we’re desperate get everyone thinking about the oceans, but we’re also limited by time and resources. We need help from the right connections. It needs to start NOW. This one’s a game changer.