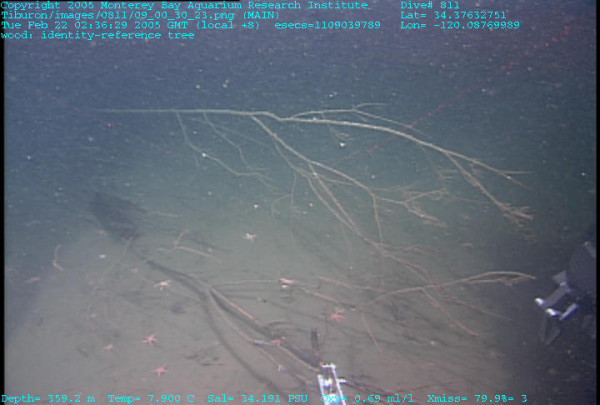 At two miles below the ocean’s surface, I see wooden carcasses, once buoyant, lying listlessly on the abyssal seafloor. They range from small fragments to 2000+ pound behemoths.  Ligneous cadavers litter the seafloor, a last resting place for visitors from a faraway and drier place, becoming rare as distance to home increases.

Each day a tree dies.  Its carcass may lay there on the forest floor, ravaged by fungus, insects, and plants as they grow from its remains.  But, perhaps my tree meets a watery grave–gently floating down river ultimately finding itself bobbing in the ebb and flow of the tides.  Eventually covered with an unexpected range of marine hitchhikers, from worms to bivalves, the tree is forced under by their collective weight.

Or perhaps my tree’s end was violent. Monsoonal rain and flooding waterlogged the tree and, upon receding, carried the carcass to sea.  Maybe the flooding caused a massive turbidity current, an underwater landslide, carrying the tree down a submarine canyon.

Alternatively a coastal tree simply may have found itself horizontal in the surf, pounded by waves driving water in and air out.  Or maybe my tree leisurely traveled the ocean and over time while capillary action pulled water further in its submerged trunk sinking it to the dark bottom.

No matter its path to the deep, at a critical depth and pressure the ocean squeezes the last bit of terrestrial air out of the wood replacing it with brine.  So begins a story with a tree sinking to the deep.

Act 2: A House and a Buffet

This wooden carcass on the seafloor, called a woodfall, brings shelter and sustenance.  In the deep, devoid of light and plants, a wood carcass also brings a rare commodity—food.  The amount of carbon a tree or piece of wood brings to the seafloor can be anywhere from ten to a thousand times that regularly encountered on the seafloor.  From the carcass comes nourishment to sustain deep-sea life.

A piece of hard wood also provides another rarity on a muddy seafloor—a solid surface.  Currents are sluggish in the inches close to the seafloor as they’re slowed by friction as the water moves across the bottom.  Without currents the oxygen and food needed for life cannot travel in.  Organisms can rise above these current problems by climbing wooden hills.

Act 3: Eating Wood, Not For Everyone

The digestion of a fibrous and solid food source requires talent, a hearty gut, and some help–traits not many species possess.  These organisms finish the tree off, tearing it apart from inside and out.  Bivalves of the genus Xylophaga (measuring less than an inch) use a ridged shell to bore into the wood, ingesting the wood fragments.  On their gills they host an endosymbiotic bacteria that can digest their woody snack.  What’s surprising given the rarity and uncertainty of that wooden treat along the deep-sea floor, is that nearly a dozen species make their life this way and half-dozen Xylophaga species can occur on a single log.

As Xylophaga consume their way through the heart of the wooden cadaver, the squat lobsters Munidopsis andamanica pick away at the barky skin.  These squat lobsters use their spoon shaped claws to tear pieces of the decayed wood off, using the depression in their claw to hand off to the feeding appendages well adapted to dealing with large food items.  With the aid of bacteria and stomach-like gastric mill lined in teeth, the dead wood starts its path to providing nutrition.

Members of a woodfall community are a mixed bag.  The most prominent members because of their size and sheer numbers are wood-boring bivalves and squat lobsters.  Mollusks, including chiton, snails, limpets, and bivalves dominate.  Crinoids will take up residence to escape sluggish bottom currents and feed in the currents above the seafloor.  A variety of crustaceans from roly-poly relatives to hermit crabs will set up shop. Marine worms, including some large predators, work their way through the boreholes created by Xylophaga.

The most enigmatic and rare species to inhabit a woodfall is the echinoderm Xyloplax.  Only discovered in 1983 and described in 1986, Xyloplax likely represents a completely new class of echinoderms on par with urchins, crinoids, starfish, basket stars, and brittle stars.  At around 10mm in size the species represents an anomaly with a bizarre anatomy (discussed by Chris Mah here and here and myself here) including the complete lack of a gut.

Act 5: From Death to Life to Death

In 2011, I sat in a control room on the surface watching images on a high-definition monitor sent back to me from a robot 2 miles below.  In front of me, or more accurately in front of the robot, is a log I deployed over 5 years ago.  Around it are 36 logs ranging in size from a few pounds to well over 60.

Last year, this question drove me to collaborate with graduate student Jenna Judge and her advisor David Lindberg from the University of California Berkeley last year.  In Jenna’s words,

Have you ever wondered what would happen if you chucked a bunch of logs into the deep sea?… One question that I’m interested in is whether the kind of wood matters to the critters that are living on it.  [Does] the physical composition of the wood [matter]? Is there a link between older groups of plants and older lineages of animals, which would suggest the animals in the ocean have responded evolutionarily to the evolutionary succession of plants on land? For instance, critters living on Ginkgo (a gymnosperm) would be older lineages than those living on Oak (an angiosperm).

This explains why Jenna and I are visiting the site in 2011 to deploy different types of wood, not why 36 pieces already lie on the seafloor.

In a typical community with a finite resource, we know a community rises, climaxes, and then wanes. At the climax, the diversity and total amount of life is at its highest.  What occurs in the narrative of a woodfall community? When do the players enter and leave this performance?  How long will with this woody drama last?  Do certain players like Xylophaga have more important roles than others? Is the play the same every time?

In 2006, Jim Barry and I chunked 36 logs overboard to test these very ideas.  Chunked may be a strong verb for sending them down on a benthic elevator.  Once on the bottom, a remotely operated vehicle dispersed them over a 1600 square foot area now affectionately referred to as Deadwood.  In 2011, we retrieved 18 of these. On the surface, Jenna, others, and I picked through the once solid but now bore-riddled and crumbling logs for Xylophaga, limpets, worms, snails, and other wee beasties.  As we picked through the rotting wood carcasses, my level of excitement was only matched by the stench of decomposition.  Why was I excited? I realized that I could address some of the key questions I posed 5 years earlier.  More importantly, I realized, due to unexpected events in the life of these logs, some of those questions I now could not answer.  This beautiful and unforeseen event, while invalidating my original experiment, yielded something more fascinating. It revealed far more about the function of the deep sea than I originally planned or hoped for from my meager experiment.  What was that finding?  You’ll just have to wait and see.

Share the post "A Lonely Tree Far From Home Brings New Life to the Ocean Deep: A Narrative in Five Acts"

10 Replies to “A Lonely Tree Far From Home Brings New Life to the Ocean Deep: A Narrative in Five Acts”