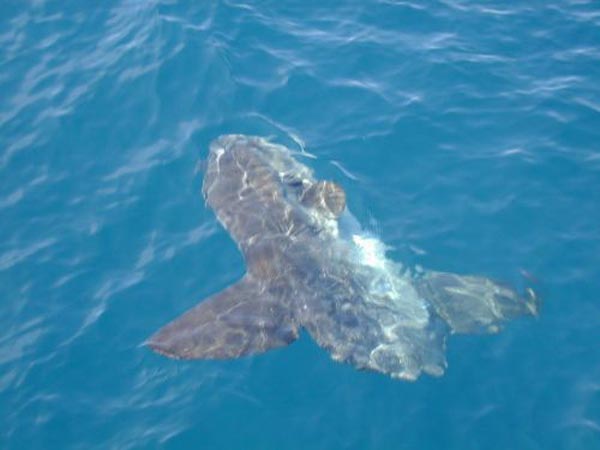 From NOAA’s Ocean Explorer: A mola mola soaks up the sun. Image courtesy of Jon Moore.

Amidst an odd week of impending deadlines, a national holiday and the celebration that ensues, and record temperatures, I am not ripe for unique contributions to Deep-Sea News right now.  Luckily I can rely on the writing of others.  So here are some my favorites from the recent.

Ed Yong has my two favorite posts, both with video, this week at his blog.

Brown saw a male cuttlefish swimming between a female and a rival male, and displaying different messages to both of them. On his left half, the one the female could see, he flashed zebra-stripe courtship colours to advertise his interest. But on his right half, facing the rival male, he flashed the mottled colours of a female. As far as the competitor was concerned, he was swimming next to two females, oblivious to the act of cross-dressing/seduction going on right next to him. The cheater, meanwhile, prospers.

The giant bumphead parrotfish (Bolbometopon muricatum) is the biggest herbivorous fish in coral reefs. It can reach 1.5 metres in length and weigh over 75 kilograms, and it has a distinctively bulbous forehead. Why? There are rumours that it uses its head to ram corals, breaking them up into smaller and easier-to-eat chunks. But Roldan Munoz from the National Oceanic and Atmospheric Administration has discovered one definite use for the bump: headbutting rivals.

Why Sharks Matter discusses at our daughter blog, Southern Fried Science, about a recent genetics that reveals 79 potentially news species of sharks and rays.

A cryptic species is defined as a group that looks almost exactly like another, and may even live in the same region, but is genetically distinct. We’ve known that cryptic species of sharks and rays exist for some time, such as manta rays and scalloped hammerhead sharks, but 79 is a lot; as of the paper’s publication, only 1,221 species of sharks and rays were recognized.

Southern Friend Science provides at SFS the blog everything you needed to know about ocean science and conservation on Twitter.  Best advice? Just follow look over to right-hand side of DSN and follow all of us.  Then go follow everyone at SFS.  Then follow the #deepsn hashtag on Twitter.
Of course the most exciting scientific news lately, no not that news, is the funding of OpenROV project through Kickstarter.  I have lost nights sleep planning on building my own OpenROV.  I was even more convinced I want to do this when I found out that project’s webpage provides full parts list for McMaster-Carr (you know how much we love them).  I am extremely supportive of this project in general though as

OpenROV is an open source robotic submarine designed to make underwater exploration possible for everyone.  It’s also an online community of professional and amateur ROV (remotely operated vehicle) enthusiasts on OpenROV.com.The Goal: to inspire and enable anyone to become a DIY Ocean Explorer. We believe in the power of open source communities to create amazing tools and experiences. This is an invitation to become a co-developer of the OpenROV project.

If you read Deep-Sea News, you know how much we love Osedax bone eating worms.  They eat bones and females keep harems of 100’s of males.  What is not to love?  Recently it was discovered that these worms are even more badass.

Tiny ‘bone-devouring worms’, known to both eat and inhabit dead whale skeletons and other bones on the sea floor, have a unique ability to release bone-melting acid, scientists at Scripps Institution of Oceanography, University of California, San Diego have recently discovered.

That’s right bone-melting acid, which of course makes me think of this.

And I leave you with this 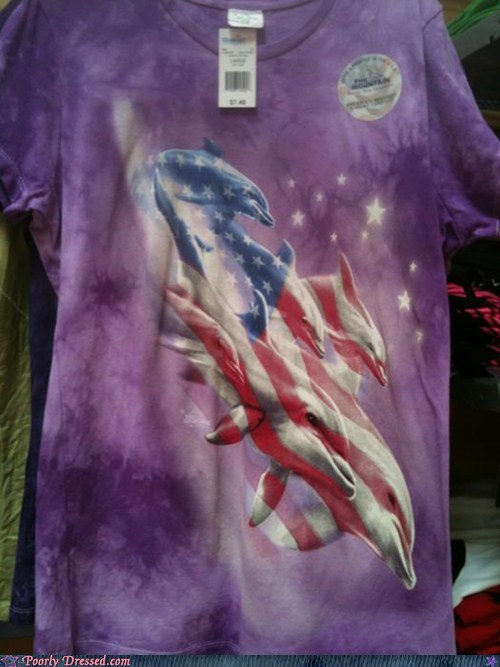 DSN sanctioned apparel for the 4th of July. From That Noblest of American Creatures, The Dolphin

One Reply to “DSN Editor’s picks”