The Ghost of Ocean Science Past
85% of Americans express concerns about stagnant research funding and 77% feel we are losing our edge in science. So how did we get here?  Part of the answer lies in how ocean science and exploration fit into the US federal science funding scene.  Ocean science is funded by numerous agencies, with few having ocean science and exploration as a clear directive. Contrast to this to how the US traditionally dealt with exploration of space. NASA was recognised early on as the vehicle by which the US would establish and maintain international space supremacy, but the oceans have always had to compete with other missions. 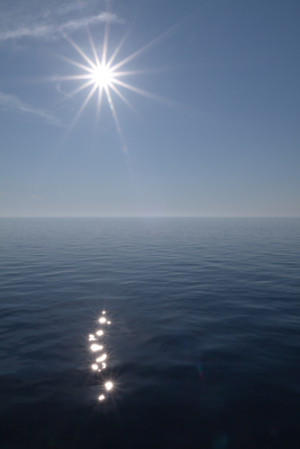 What lies below? The sun and the sea image courtesy of Shutterstock.

We  faced a weak economy and in tough economic times we rightly looked for areas to adjust our budgets. Budget cuts lead to tough either/or situations: do we fund A or B?  Pragmatically we choose what appeared to be most practical and yield most benefit. Often this meant we prioritized applied science because it was perceived to benefit our lives sooner and more directly and, quite frankly, was easier to justify politically the expenditures involved.

In addition to historical issues of infrastructure and current economic woes, we lacked an understanding of the importance of basic research and ocean exploration to science, society, and often to applied research.  As example, NOAA shifted funding away from NURP and basic science and exploration but greatly increased funding to research on applied climate change research.  Increased funding for climate change research is a necessity as we face this very real and immediate threat to our environment and economy.  Yet, did this choice, and others like it, need to come at the reduction of our country’s capability to conduct basic ocean exploration and science and which climate change work relies upon?

Just a few short decades ago, the U.S. was a pioneer of deep water exploration.  We are the country that in 1960 funded and sent two men to the deepest part of the world’s ocean in the Trieste.  Five years later, we developed, built, and pioneered a new class of submersible capable of reaching some of the most remote parts of the oceans to nimbly explore and conduct deep-water science.  Our country’s continued commitment to the DSV Alvin is a bright spot in our history and has served as model for other countries’ submersible programs.  The Alvin allowed us to be the first to discover hydrothermal vents and methane seeps, explore the Mid-Atlantic ridge, and countless other scientific firsts.  Our rich history with space exploration is dotted with firsts and it revolutionized our views of the world and universe around us; so has our rich history of ocean exploration.  But where NASA produced a steady stream of occupied space research vehicles, Alvin remains the only deep-capable research submersible in the service in the United States.