The Ghost of Ocean Science Future that We Want to See

We are at a time for renewed commitment to ocean exploration and science. As stated by the Joint Ocean Commission, “Ocean programs continue to be chronically underfunded, highlighting the need for a dedicated ocean investment fund.” Captain Don Walsh, one of three men to visit the deepest part of the ocean, recently stated it best: “What we need is an Ocean NASA.”
We borrow and modify John F. Kennedy’s famous speech at Rice University on the decision to go to the moon:

In short, our leadership in science and in industry, our hopes for peace and security, our obligations to ourselves as well as others, all require us to make this effort, to solve these mysteries, to solve them for the good of all men, and to become the world’s leading ocean-faring nation…We set sail because there is new knowledge to be gained, and new rights to be won, and they must be won and used for the progress of all people.

There is much to be gained from creating NASA-style Ocean Science and Exploration Agency (OSEA). Every dollar we commit to science returns $2.21 in goods and services. Meeting the scientific, technological, logistical, and administrative demands of scientific exploration creates jobs and requires substantial personnel beyond just scientists and engineers. The materials purchased for this cause support even further employment. As with NASA, meeting these scientific and engineering challenges will disseminate ideas, knowledge, applications, and technology to rest of society. This knowledge gained from basic research will form the backbone for applied research and economic gain later. And much like NASA has, OSEA will inspire the next generation of scientist and engineers, instilling in the young a renewed appreciation for the oceans of which we are all stewards: our oceans. It will provide a positive focus for society in a time where hope is often lacking and faith in science is low. OSEA will be the positive message that renews interest in our oceans and their conservation. 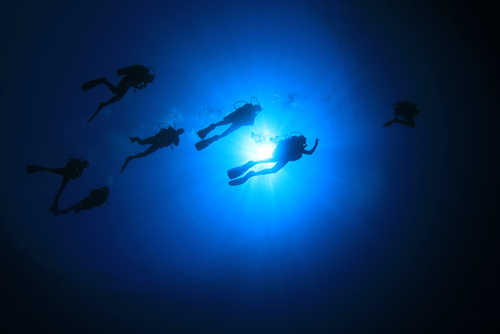 The public and scientists need to work together to explore the oceans. Group of Scuba Divers image courtesy of Shutterstock.

What Does an OSEA look like? At the core OSEA would need a mission dedicated to basic research and exploration of the >;90% of the world’s oceans that remain unexplored. High risk with the potential for high impact would be the norm. Pioneering knows no other way to achieve those truly novel and impactful gains.

To achieve these goals, OSEA would need substantial infrastructure and fleet including international and regional class research vessels, a submersible, remotely operated vehicles, and autonomous underwater vehicles. Funding would need to be secure on decadal cycles to insure both the longevity and permanence of this mission but allow for oversight to ensure OSEA was meeting its mission and financial responsibilities. An ocean exploration center would be staffed with a vibrant community of researchers, engineers, and administrators, postdoctoral fellows, graduate students, and visiting experts with a strong interacting and supportive community working toward uncovering the mysteries of the oceans. Research would be funded internally from a broad OSEA budget, not externally, freeing scientists and engineers to actually do science and engineering as opposed to the only current option, which is writing grants to other agencies with a less than 10% chance of funding.

OSEA would also be a resource both for the research community and the public by being dedicated to open science, i.e. making scientific research, data and dissemination accessible to all levels of an inquiring society, amateur or professional. Publications, data, software, and engineering would be freely available and open to all. All internal processes would be transparent.

The mission of OSEA in the spirit of open science would be equally dedicated to public outreach. For too long have science and society been disconnected. OSEA would involve the public as the ultimate funders of our work. A novel and cutting edge education and outreach group would develop a strategic plan to involve children and adults in the mission. There would be multiple opportunities for anyone to be involved including the public. Citizen scientists would be essential components, allowing adults to take a residence and contribute to OSEA and become life long ambassadors long after their residence.

Although parts of OSEA are realized in other government and private organizations, they do not meet the full mission nor can such a distributed structure be expected to meet the challenges of this pivotal moment. For example, NOAA fills a much-needed role but its mission is largely applied. NOAA’s mission statement is “Science, Service, and Stewardship. To understand and predict changes in climate, weather, oceans, and coasts, To share that knowledge and information with others, and To conserve and manage coastal and marine ecosystems and resource”. Contrast that to NASA’s simple mission, “to pioneer the future in space exploration, scientific discovery and aeronautics research.”

In an agency with a chiefly applied mission, those programs that are purely exploratory must eventually invent an applied focus or face the axe. For example, even under NURP, exploration often focused on corals and fish of considerable economic and conservation importance rather than those species of greatest novelty or knowledge deficit. The current situation at NOAA also highlights how less applied scientific programs are likely to be lost. Monterey Bay Aquarium Research Institute also provides another model that comes close to OSEA but is heavily reliant on private funding that can often be significantly reduced during recessions as endowments shrink. Moreover, a private foundation is unlikely to meet the full financial burden to support the full mission of an OSEA or provide a resource to the ocean science community as whole. This is not meant to criticize either NOAA or MBARI, indeed both supported our own research and have made immense contributions to ocean science and exploration, but neither do they fully realize our vision for OSEA.

As John F. Kennedy stated, “We must be bold.” It is time for a great national effort of the United States of America, time for us to renew our commitment to uncovering the mysteries of the blue planet we live on. We need a NASA-style Ocean Science and Exploration Agency (OSEA). to explore and research the greatest depths of oceans with a community of scientists, engineers, and citizens.