As a native Long Islander, I watched intently as Sandy made landfall.  Offshore of NY Harbor, winds gusted up 70 mph and waves swelled to 32 feet in height.  A 9ft Storm surge and large spring tides flooded downtown Manhattan. Waves battered the New York and New Jersey coasts. People died and entire communities were lost. Even today, 10 days later, I still have friends that are without power.  It was a massive and powerful storm.

Technology allowed the accurate prediction of this storm and enabled officials to make the right calls and evacuate the coasts.  And with this technology we can also see how Sandy churned and mixed the ocean.

A recent post by Brian McNoldy explains how hurricanes mix the upper ocean.  The upper ocean temporarily become cooler and saltier as warm and fresh water from the surface is mixed with cool and salty water from the deep.  Of course I had to see if Sandy did this as well, so I pulled some satellite Sea Surface temperature from NOAA to check it out.

Sea surface temperatures before and after Sandy hit land. As Sandy moved northward it mixed colder deep water up, causing widespread cooling of the surface ocean off the Mid-Atlantic coast.

And there is it, the entire Atlantic from about 30-40 N and 65-75 W are noticeably cooler on October 31 after Sandy made landfall. Even big features like the Gulf Stream, which can be seen in the left hand panel of that stream of red water are temporarily cooled. How much did it cool?  Let’s check that out too: 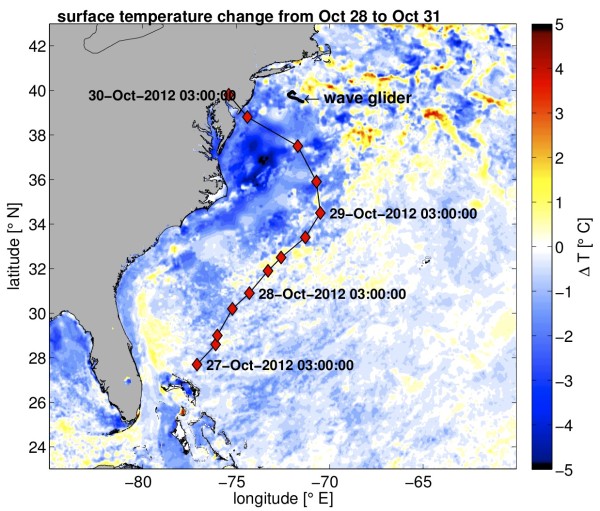 Changes in the sea surface temperature from October 28th to October 31 when Sandy made landfall. Decreases up to 5C can be seen off the Mid-Atlantic bight.

Off the Mid-Atlantic bight, cooling up to 5 degrees C  can be seen!  I can’t really say how this amount of cooling compares to other hurricanes as this is outside of my field of expertise (also hurricane experts can totally bash my analysis if it’s wonky). But if you look at the plot Brian put up of Hurricane Francis, temperatures only drop about 2 degrees, so it seems to me that a 5 degree drop is kinda big news. Of course, the change in surface temperature is not only dependent on how deep the storm mixes the ocean, but also the temperature gradient before the storm hit.  I also want to note that there seems to be widespread cooling over the entire Atlantic, but I can’t really answer if this is a real signal or just noise from using daily averaged data.

There is one other piece of information on the plots above, the location of a Liquid Robotics Wave Glider named Mercury that has been in the news recently.  Whether driven into the storm intentionally or not, this little robot survived sampling away the entire time (full disclosure:  I think these research platforms are really cool, a rep recently came to UAF to give a presentation and I’ve applied for a position with the company).  And it got a bunch of data, which again I have pulled using the Marinexplore platform.

Wave Glider Mercury survives and samples whilst bobbing away in Hurricane Sandy.

But of course all this data only shows us what is happening at the surface.  To look inside the ocean, Rutgers deployed their robot glider into the Hurricane as well.  And what they saw on the Jersey continental shelf was mixing.  A lot of it. Volume scattering tells us how much material is floating in the water. On Oct. 29 you can see the signal get way stronger as Sandy starts churning up silt and sediment on the shallow shelf.

Above is a plot of turbidity, or how many particles of stuff are in the ocean.  The suspended particles can be sediment or biological matter, but this sensor can’t discriminate between the two. When the glider flies beneath the storm on October 29th, turbidity increases. All the gunk in the water indicated that intense turbulence is churning the water, causing sediment at the bottom to be mixed upwards. And in shallow water like this, intense turbulence mixes the entire water column causing sediment to make it all the way to the surface and also cooling the upper ocean.

The awesome power of large storms are clearly evident while on land.  And now you know about their huge influence on the ocean too.

5 Replies to “A recap of Hurricane Sandy: the ocean version”