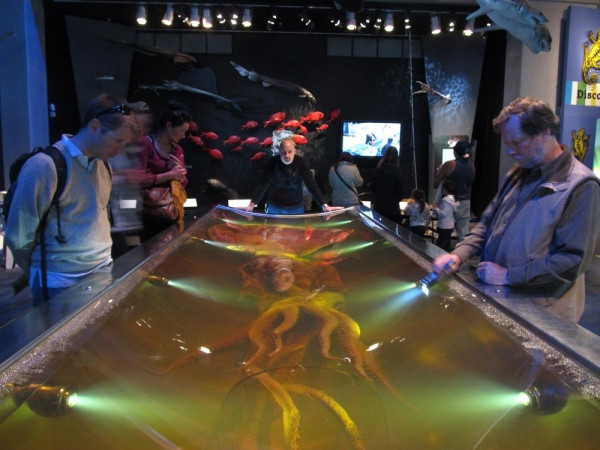 However, the colossal squid may be a sluggish predator.  Rosa and Seibel argue, based on some models of metabolism in other squids, that

Of course when you have hooks for arms why not just sit and wait?

Steve O’Shea, expert of all big and squiddy, also noted from his dissection of the Te Papa specimen that as the female matures she gets shorter, broader, and more gelatinous. i.e. she get fat and lazy.  Simply put she is a large gooey vessel for thousands of eggs.  I think its a bit unfair to call her fat and lazy.   She has simply chosen to invest her time and energy elsewhere. You try carrying thoudands of eggs and see how fat and lazy you become.

This all brings me around to more current events.  The specimen housed in the Te Papa Museum in Wellington, New Zealand is the largest complete specimen of a Colossal Squid.  The Colossal Squid has been known to the scientific community since 1925 when it was described from two arm crowns recovered from a sperm whale stomach at the Falkland Islands. Only nine specimens above juvenile size have been reported since 1925, none complete.   In February 2007 the longlining vessel San Aspiring, fishing for Antarctic toothfish (Dissostichus mawsoni Norman) in the Ross Sea caught this 495kg (1091 lbs, 0.5 ton) adult specimen.

But the best part? The specimen is available for the public to see and I just happen to be in Wellington for the 2012 Deep-Sea Biology Symposium.

6 Replies to “Dr. M and the Colossal Squid”