Alexandria Warneke is a masters student at San Diego State University. You may remember that Alex had a Scifund project asking for funds to support her research in chemical ecology.  I so was impressed with Alex video dropping made science rhymes over the beat of Fresh Prince of Bel Air that I asked her to contribute some guests posts to DSN.  Her first is below.

“S.O.S. please someone help me.
It’s not healthy… for me to feel this way
Y.O.U. are making this hard,
I can’t take it, see it don’t feel right.” 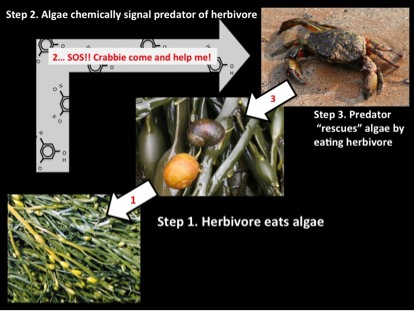 Certain seabirds (albatrosses, prions, petrels) often find themselves wandering the vast ocean for exceedingly large amounts of time. Unfortunately for them, the ocean doesn’t have those cool little blue highway signs that tell you food is coming up at the next gyre or where you can get a good plankton burrito. Yet…they still manage to find food. How? Well, it just so happens that when zooplankton (Euphausia superba) start to eat phytoplankton (Phaeocystis pouchetii), the phytoplankton release their Rihanna cues, a chemical known as dimethyl sulphide (DMS). The petrels in particular then use their Jedi powers to sniff out this DMS, leading them straight to the plankton candy shop. Same thing happens when my mom is cooking up a batch of extra fudgy chocolate swirl brownies…I can just cue in on the amazing aroma and make my way to the dinner table.

Off the Coral Coast of Fiji, certain seaweed species have gone on a coral killing rampage due to their chemically caustic nature. Allelopathic seaweeds, as they are referred to, produce chemicals that are detrimental to many coral species.  Corals are already in a pretty crappy situation. Now this? What’s a coral got to do to get some love? Fortunately, the coral Acropora nasuta is a big fan of Rihanna too and figured out the best way to survive these seaweed invaders…get bodyguards.  So when the nasty green alga, Chlorodesmis fastigiata, tries to overgrow A. nasuta, this coral species sends out its “SOS” distress signal. These chemical cues attract the symbiotic “bodyguard” goby fishes, Gobidon historio and Paragobiodon enchinocephalus, and they come to bash in some seaweed heads (or just rid the coral of its leafy green pest). This isn’t just a one-way street though. Not only do the corals provide their bodyguards with shelter from predators who might be lurking on the reef, but in the case of G. historio, researchers believe that eating the chemically noxious algae in turn increases the chemical nastiness of the gobies themselves. Mutualism at it’s finest.

To “Rap” this all Up

Scientists are proposing two ways these types of chemically-mediated tritrophic interactions came to be, and may ultimately have to duke it out in a cage match.

The first being the bodyguard hypothesis, or “Rhianna” hypothesis as I like to refer to it, states that algae/corals are sending out these cues to get some help them for attacker riddance, as was the case in the goby bodyguard scenario.

The second hypothesis, let’s call it the “Delicious Brownie” hypothesis, is that these chemicals are just naturally released when grazers consume algae and that predators have learned to exploit these cues to hone in and find their prey (or find my mom’s homemade chocolate goodness), which seems more likely in the Fly DMS example.

So now you know the true meaning of that song…I promise you…you won’t ever hear it the same way again. You’re welcome.

One Reply to “SOS Please Someone Help Me…”