Disclaimer: not everything in the following article is based on the truth… 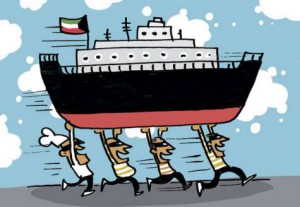 Police in San Diego, California caught a missing South Carolina woman on Tuesday after she tried to steal a 120-foot research ship while its sleeping scientific occupants were still on board (story here). The media is reporting that the woman involved was “suffering from mental distress and was looking to get back to South Carolina”. No other details have been released as of yet, but Deep Sea News can exclusively reveal that the woman was an untenured professor, at South Carolina Institute for Oceanography, in the midst of a mental breakdown (a necessary step in the tenure process).

The woman involved, Dr Natalie NoTenure, in an interview with Deep Sea News, revealed the following: “Money has been tight in my lab for a while now, and things have only gotten worse recently, what with the budget sequester and all. This just seemed like the only option.” Asked what she was going to do with the ship if her plan had been successful, Dr NoTenure revealed that she was “going to use it for a personal data-collection bonanza, which would have led to an awesome Nature paper.” She went on: “The plan was that once the sleeping scientists had woken, I was going to convince them to help me collect my samples by offering them named authorship status on the paper.” When asked if she thought other scientists would have been willing to break the law for this, she gave the following reply: “Oh sure! Nature papers are like crack to scientists. There is little they won’t do, when the opportunity to be on one is wafted in front of their noses.”

If only she hadn’t been caught by police, her crazy plan may have just worked. Unfortunately, she didn’t have anything to bribe the officer who caught her as her time in academia had left her financially crippled: “I hadn’t planned on getting caught and I had nothing to use as a bribe. I tried offering him named authorship on a Nature paper, but he just laughed at me!”

It is not clear if Dr NoTenure had thought her bold move all the way through. Even if she had been successful, she must have realised that her job at the South Carolina Institute for Oceanography would have been in jeopardy upon her return. When we put this to Professor Larry Ocean, the Dean of the institute, he had the following to say on the matter: “Sure, it was a risky strategy that Dr NoTenure chose to pursue. We don’t encourage our staff to break the law and we intend to fire her with immediate effect. We hope she is prosecuted using the full force of the law. It is a shame she got caught though as it was a nice idea. At the end of the day we are in the results business here and if her plan had been successful in securing a high impact paper for us, we would have been delighted. It may have even led to her being granted tenure here.”

If there are any other untenured, underfunded oceanographers out there who want to save money, publish high impact papers, and kick ass on a budget (without breaking the law), check out the Deep Sea News guide for doing oceanographic research with almost no funding.