Are you ready to rock?  ROCK THE OCEAN THAT IS! Then bust out your wailing guitar solos, leopard skin leotards, double bass pedals, and aquanet. Welcome to the Hair Metal Guide to the Ocean! Because glam rockers love the ocean.

You may not remember the awesome head and chest hair of Kip Winger, frontman of the surprisingly named band Winger. But he doesn’t care. He just wants you to remember one thing: THERE’S ONLY SEVEN SEAS!*

Our next hair metal phenomena are Tommy LEE WAVES. Just like his relationship with Pamela, these waves are driven by humps, humps and bumps at the bottom of the ocean that is! Lee waves are created when deep currents flow over rough bathymetry, forcing water up and down over these little hills to emit waves that radiate upward into the ocean interior. And just like my beloved internal waves, Lee Waves also break and mix the ocean. In fact, new research suggests that the breaking of lee waves can account for up to one third of the mixing that transforms water masses in the Southern Ocean!

You might have met this ocean phenomena in a previous post, stretching to great lengths across the Pacific Ocean is Gene Simmon’s COLD TONGUE. Occurring during La Nina, this ocean organ is a mass of cold water that extends from South America way out into the Pacific. But first, to coax this tongue out you need to turn on the hairdryer, the trade winds. Set on high, these westward winds upwell cold deep water off the South American coast and push it way out into the Pacific, forming the signature cold water streak. But there is always a time and a place for exposing your cold tongue. Once that hairdryer is turned off during normal and El Nino conditions, the winds die down and the cold tongue retreats back to the briney depths.

Now it is time for the power ballad, EVERY WAVE HAS IT’S DRIFT. Fluid flow in a wave is oscillatory, pushing water backwards and forwards, up and down, making the lovely loop-de-loops seen below. But at the wave crest, the forward motion is larger than the backward motion in the wave trough causing a net forward transport of water. Just like a love song, the process of pushing water at the top of the wave forward is very slow, causing a slow drift of water in the direction of wave propagation, called Stoke’s Drift  after the dude that invented it.  Please raise a lighter to Poison’s beautiful ode to fluid dynamics.

Was it some gust of wind or some type of tide?
Did that wave just push you right?
Though it tried not to flip you,
Though it tried,
But I guess that’s why they say

And finally, THE EDDIES VAN HALEN. Let their swirls mesmerize you. 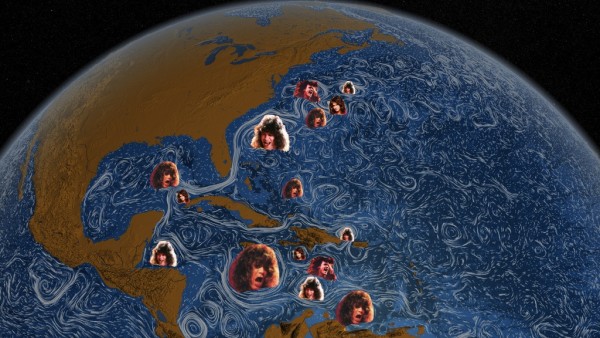 UPDATE:  I completely forgot Warrant’s ode to undersea exploration, WHERE THE DOWN BOYS GO.  Thank you @DrChrisKellogg.

* This does depend of your definition of which seas are important, Kip and I chose the largest ones.

3 Replies to “The Hair Metal Guide to the Ocean”