While we here at Deep Sea News utterly disliked the Discovery Channel fiction-presented-as-fact documentary “Megalodon” we couldn’t help but love SyFy’s “fiction-presented-as-campy-AWESOME” that was Sharknado.  Real science has shown that Megalodons aren’t still voraciously roaming the seas,  but I’m not so sure that science has utterly disproved whether a sharknado can exist. Therefore in the sprit of other epic monster movie takedowns, let’s use fact to figure out if the Sharknado truly is fiction.

To start, let’s get some minor semantics out of the way. Some Sharknado naysayers love to point out that a sharknado can never exist because a tornado over water is technically a water spout. But the truth is a little grayer than that, as water spouts come in two different flavors, tornadic and non-tornadic. Non-tornadic water spouts (also known as fair-weather water spouts) are relatively wimpy and form under relatively calm cumulus cloud towers. Tornadic water spouts are their bigger, badder and more dangerous cousins, forming under the same intense atmospheric conditions that create land-based tornados! Only the tornadic water spout has enough energy to create an airborne shark vortex, making Sharknado a completely appropriate term. 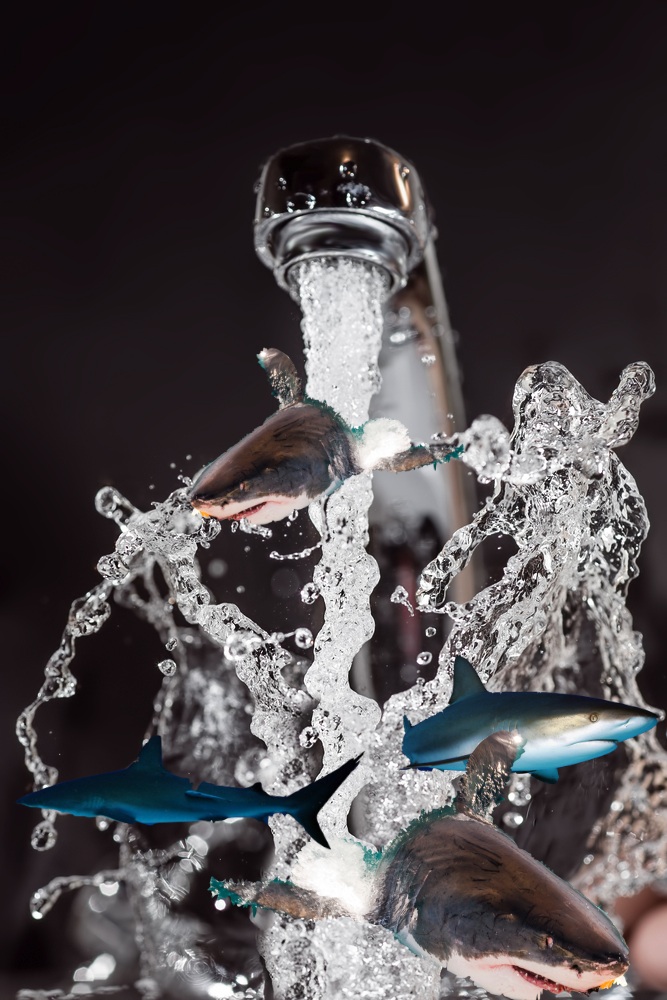 To find out whether a Sharknado can actually happen, we need to set up the hypothetical situation that would create the Sharknado. You need a tornado over water, a bunch of sharks in the path of that tornado, the ability to suck those sharks out of the water, and enough energy to keep them aloft until they can rain down upon an unsuspecting human populace. Sounds easy right?

How many sharks can one tornado have?

The number of sharks a tornado can recruit to create a Sharknado is directly proportional to the number of sharks it flies over. A typical tornado is about 0.1 miles wide and travels about 5 miles, covering an area of 0.5 square miles. A healthy reef typically has a shark density of about 300 sharks per square mile. So a typical tornado flying over a typical reef could only could only pick up about 150 sharks. Not that terrifying.

But Sharknado’s aren’t your typical tornados. One of the largest recorded tornados struck Hallam, NE in 2004. It was 2.6 miles wide and on the ground for 52 miles! If maximum shark density was achieved,  it would have picked up over 40,000 sharks! OMFG.

RESULT: Your average Sharknado will only pick up 150 sharks. But if your Sharknado is ridiculously big, then it has the potential to hold a scary number of sharks.

How do you make a shark airborne?

Conceivably, the easiest way to get a shark into the air is to have the tornado suck it out of the water. But this hypothesis has a minor problem, as tornadic water spouts don’t usually suck up water. That is not to say that small fish or even small sharks haven’t been hoisted aloft by atmospheric phenomena, but it isn’t really clear (at least to me) how they make the transition from sea to air. Sorry tornados, you just aren’t strong enough to suck a 1000 lb Great White into the air.

But maybe shark behavior is to blame for Sharknadogenesis? Unable to resist the swirling tornado above, thousands of sharks launch themselves into air to be hoisted aloft by screaming winds! Sounds epic, but it’s probably not going to happen. Tagged sharks have been observed diving to deep depths when a hurricane or thunderstorm approaches, so they would probably just exhibit the same behavior when a tornado (which are usually caused by thunderstorms) cruises on by.

RESULT: Unless beamed up by aliens, those sharks aren’t going to get out the water.

How much wind do you need to keep your sharks airborne?

Balancing these forces and doing a little math manipulation, we get the formula that tells us the minimum wind velocity needed to keep a shark flying is:

which is a function of the shark’s mass m, the shark’s density ρ, the cross-sectional area of the shark A, the acceleration of gravity g (9.8 m/s) and the drag coefficient.

Let’s start big, solving for a Great White Shark. A big Great White weighs 1000 kg, has a length of 5.3 meters and width around 1.2 meters and a density around 1050 kg/m3.  The drag coefficient tells you how hard it is for an object to move through a fluid such as air or water, and as a lean and mean swimming machines, sharks have a vey low drag coefficient. In fact, they are so efficient at swimming, that researchers study their skin to figure out how to reduce drag on airplanes! I couldn’t find a shark drag coefficient in air, so I am going to make a conservative estimate of 0.9, which is 10% more efficient than the drag coefficient of a human skydiver.

RESULT: Winds in the most intense tornadoes are strong enough to keep a shark airborne.

In conclusion, a tornado can’t suck up sharks to make a Sharknado, but if it could there would be a lot of them. If you are an evil villain with the ability to throw several thousand Great Whites into a tornado, you could probably make a Sharknado. Whether they will bite you or not is up to them. Carry a diversionary herring just in case.

9 Replies to “Recipe for a Sharknado”