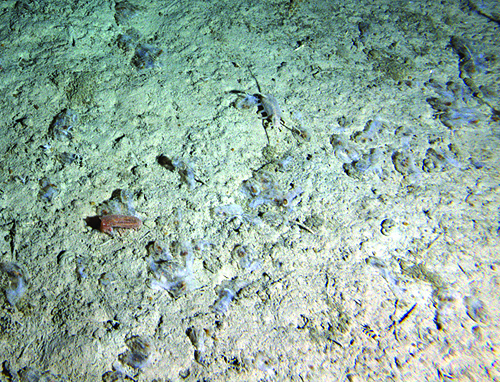 In spring 2012, the muddy seafloor at Station M was literally covered with the silvery bodies of dead salps (gelatinous midwater animals that feed on microscopic algae). This debris provided food for seafloor animals such as sea cucumbers. Image © 2012 MBARI

Recently we at Deep-Sea News have tried to combat misinformation about the presence of high levels of Fukushima radiation and its impact on marine organisms on the west coast of the United States.  After doing thorough research, reading the scientific literature, and consulting with experts and colleagues, we have found no evidence of either.  In the comments of those posts and on Twitter, readers have asked us about the “evidence” of dead marine life covering 98% of ocean floor in the Pacific as directly attributed to Fukushima radiation.  After some searching I found the main “news” article that is referenced.

The Pacific Ocean appears to be dying, according to a new study recently published in the journal Proceedings of the National Academy of Sciences. Scientists from the Monterey Bay Aquarium Research Institute (MBARI) in California recently discovered that the number of dead sea creatures blanketing the floor of the Pacific is higher than it has ever been in the 24 years that monitoring has taken place, a phenomenon that the data suggests is a direct consequence of nuclear fallout from Fukushima.

Before I discuss this “evidence” further, I want to provide a little background.  I am a deep-sea biologist and over the last several years my research has focused on the biodiversity of deep-sea communities off the California coast.  Like many others, I am also working toward understanding how deep-sea life will respond to increased anthropogenic impacts particularly climate change.  This resulted in a high profile publication in the Proceedings of the National Academy of Science.  I mention this background because 1. It explains why I view myself as an expert to comment on this and 2. it explains why I was confounded for a moment when I thought I had missed a paper in a journal I have published in, on a geographic region I study, and on a topic close to my own research.  And to boot from researchers at institution (MBARI) I was formerly employed with.

The reason I am unfamiliar with a study providing evidence of  “Dead sea creatures cover 98 percent of ocean floor off California coast; up from 1 percent before Fukushima” is because no such study exists.  Here are the details of the actual study. 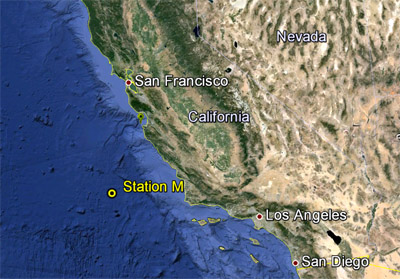 Station M is a long-term study site on the abyssal plain, about 220 kilometers (140 miles) off the Central California coast and 4,000 meters (13,100) feet below the ocean surface. Base image: Google Earth. From MBARI

Ken Smith’s group at MBARI has monitored a deep-sea abyssal site called Station M off the California coast continuously since 1989 (24 years).  Their work has lead to many major findings.  A majority of deep-sea animals are completely reliant on the sinking of food from the surface, i.e. marine snow. One of the most important findings from Smith and colleagues’ work is that rhythm of deep-sea life is intrinsically linked to the production of phytoplankton at the oceans surface. Thus El Nino/La Nina cycles and other such meteorological/oceanic events leave a deep-sea signature.  Ken’s research has been paradigm shifting for deep-sea research.  We have moved from a belief of a stable and climate-buffered view of the deep sea to one of a dynamic system intimately related to seasonal, annual, and decadal changes in surface production and ocean currents. 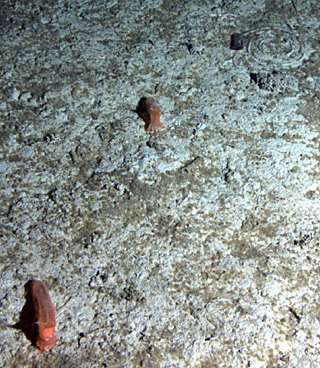 From 2003 to 2012 the amount of phytoplankton production, fodder for marine snow, was higher than years prior.  After 2006, the frequency of spikes in marine snow, i.e. blizzards, also increased.   In the summer of 2011, the first of three dramatic blizzards occurred.  During this event a large number of diatoms bloomed at the surface and sank rapidly to the seafloor.  The second event in the spring/early summer of 2012, was triggered by a major bloom of gelatinous salps. As mentioned in the press release of the paper, “These salps became so abundant that they blocked the seawater intake of the Diablo Canyon nuclear power plant, located on the California coast east of Station M.”  When these salps died, as they do after a bloom, they carpeted the seafloor.  In September 2012 another plankton bloom occurred and this combined with fecal pellets from salps (who hungrily munched on the algae) again carpeted the floor with marine snow.  In addition the greatest amounts of marine snow and consumption by deep-sea life (as measured by respiration rates) occurred in the last two years of the time series.

Modified from Smith et al. 2013. Long time-series measurements from July 1989 through November 2012 at Station M in the northeast Pacific Ocean on a monthly basis. Blue bars highlight the timing of peaks in NPP (a proxy for phytoplankton production) from 2010 to 2012. (B) Net primary production (NPP) within 100-km-radius circle around Station M. (C) Satellite estimated EF (export flux a measurement of the amount of material sinking to the deep sea) in a 100-km-radius circle around Station M, calculated for a nominal depth of 100 m.

What caused these recent changes in marine snow?

The abyssal area surrounding Station M is influenced by the California Current, which is experiencing increased wind stress, resulting in increased upwelling of nutrient-rich subsurface waters, contributing to increased primary production. With increasing primary production there has been a corresponding increase in POC flux and detrital aggregate accumulation on the sea floor over the past several years.

And from the press release,

The researchers note that deep-sea feasts may be increasing in frequency off the Central California coast, as well as at some other deep-sea study sites around the world. Over the last decade, the waters off Central California have seen stronger winds, which bring more nutrients, such as nitrate, to the ocean surface. These nutrients act like fertilizer, triggering blooms of algae, which, in turn, sometimes feed blooms of salps. The fallout from all of this increased productivity eventually ends up on the seafloor.

Nowhere does the paper or the press release mention radiation or Fukushima. Nilch, negatory, nadda, never.

But this is not good enough for staff writer Ethan Hunt and others outlets that continue to recycle this story.

Though the researchers involved with the work have been reluctant to pin Fukushima as a potential cause — National Geographic, which covered the study recently, did not even mention Fukushima — the timing of the discovery suggests that Fukushima is, perhaps, the cause.

MBARI today also issued a press release addressing the “several misleading stories [that] have been in circulation on the internet.”  The press release points out the obvious.

I will also note the Fukushima disaster occurred in March 2011, five years after the researches begin to see changes in surface production.   To reiterate the statements points, there is evidence of more life recently in California waters. The supposed “die off” is a common feature of any bloom of short-lived invertebrates. The “die off” was experienced at one location and with one species.  The entire Pacific seafloor is not littered with dying organisms.  I would also point out that these massive food falls of marine invertebrates are a common occurrence. For example, in 2002 a massive deposition of jellyfish was seen in the deep Arabian Sea.

As I write this post on this cold Saturday morning, my attitude matches.  I have wanted to write about this paper for a while here at DSN.  And I’m sorry I did not.  I shoudn’t be defending great science against propaganda and poor journalism.  I should be writing about how this paper answers a major question about the deep sea.  Previous studies have noted that the energy requirements of deep-sea animals could not be met by normal and minimal marine snow.  Research over the last decade or so set out to determine how this deficit is made up.  Smith and colleagues’ work solves this riddle.  Deep-sea animals simply wait for a sporadic feast.  Smith’s work suggests this is likely linked to climatic events.

If anything the paper is a cautionary tale of climate change not radiation.

26 Replies to “Is the sea floor littered with dead animals due to radiation? No.”