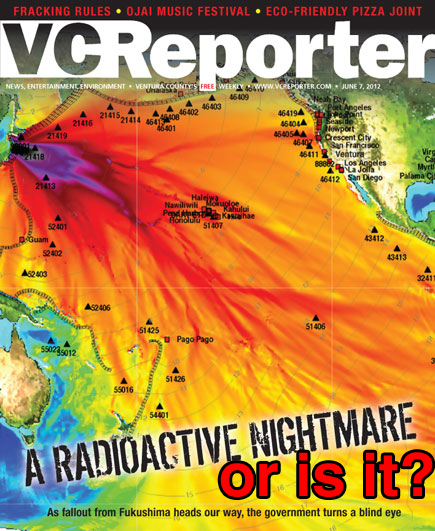 This isn’t a map of radiation, it’s a map of wave estimated hight after the Tohuku Tsunami. So why is there so much outrage and fear around Fukushima radiation, even when there is evidence to suggest it’s not as bad as we fear? To answer this, I invited psychologists Anselma Hartley and Joachim Krueger to contribute this guest post.  Anselma received her Ph.D. from Brown University in 2013 and is currently on the job market. She researches social cognition and the assessment of personality change. You can find her on Twitter: @anselmahartley. Joachim is a professor of psychology at Brown University, a social psychologist, and author of the Psychology Today blog One Among Many.

Let’s talk Confirmation Bias
Why do some people hold fast to apocalyptic ideas, like Fukushima radiation, even when the best available evidence suggests that the world is not about to end? Confirmation bias is the term psychologists use to describe the behavior of testing an idea by searching for evidence that supports it. This tendency to confirm pre-existing beliefs creates and maintains false perceptions of reality because people fail to acknowledge information to the contrary, even when readily available. The strongest type of confirmation bias arises from a motivation or a need to see the world as we want to see it. Here, confirmatory information is purposely sought out and any information challenging our preconceived notions is ignored, discounted, or dismissed.

Confirmation bias can play a role in the angry reactions to scientific evidence regarding the scope and effects of the Fukushima accident. Although evidence suggests that radiation emanating from Fukushima will not reach a catastrophic level on an ocean or global scale, many people remain convinced that the risks to human and ocean health are enormous. A person with deep concerns about environmental impacts of radiation will likely seek out evidence to confirm the belief that the radiation from Fukushima has spread in high levels to the American West Coast and beyond, contaminating fisheries, and killing off species in the Pacific Ocean. This person may unknowingly exhibit confirmation bias by focusing on information in the media consistent with these ideas and discounting information that would challenge them.

What are the psychological sources of confirmation bias?
One source of confirmation bias is defensive; to protect the psychological self. As humans, we are motivated to protect the integrity and perceived value of who we think we are (Steele, 1988). When we encounter information that threatens a self-relevant belief, we experience a state of a discomfort (termed cognitive dissonance) arising from the discrepancy between what we think defines us and, what the world is appearing to tell us. To resolve this discrepancy, we either actively seek out confirmatory information in the first place, or dismiss or re-interpret challenging information (Hart et al., 2009).

A second source is the tendency to base beliefs about the risks and benefits of an event on our cultural worldview. Kahan and colleagues (2008), for example, found that when they presented research participants with balanced information about the benefits/risks of nanotechnology, participants were polarized: People with a conservative, individualistic outlook noted the benefits of the technology and came away with a more favorable attitude, whereas people with a more liberal, egalitarian outlook focused on risks and hazards; their attitudes become more unfavorable. Given these findings, it is reasonable to speculate that perceptions of risk in the area of nuclear energy are highest among those of us whose core values are liberal and egalitarian.

Who is susceptible?
Most of us fall prey to the confirmation bias at some point. It is human nature to analyze new information in light of our core beliefs and favor inferences that are in accordance with these beliefs. Those of us with liberal or conservative political leanings likely do this when choosing the candidate we will vote for in an upcoming presidential campaign, regardless of the candidates’ campaign ads or campaign spending (Garramore et al., 1990; Kaid, 2004; Levitt, 1994).

Consuming information on the internet and traditional media may not be enough to form accurate beliefs. The media tends to favor negative, violent, and sensational information (Lowry et al., 2003; Marsh, 1991). News is often equated with bad news. Focusing on the negative fosters a mindset characterized by overestimating risk, and a readiness to perceive the self as a victim (Doob & Macdonald, 1979). If a person’s ideological leanings stress the negative, the apocalyptic, or the conspiratorial, this media bias and the psychological confirmation bias converge (or “conspire”) to produce and maintain a grim outlook.

How do I prevent confirmation bias?
Not surprisingly, researchers recommend carefully selecting sources. Is your information coming from a social media site of questionable credibility, or is it coming from a reputable media source or perhaps directly from the scientific literature? A focus on credible and competent sources of information can help keep the effect of prior beliefs at bay, and open our minds to alternative points of view.

To combat confirmation bias further, you may decide to strategically consider news from diverse sources with known biases or ideological leanings. Deliberately increasing exposure to views that conflict with prior beliefs can promote a more careful consideration of, and appreciation for, other perspectives. Even if this consider-the-alternative strategy does not change your attitude, it provides a more balanced understanding of the issues at stake and it will make it less likely that a debate is cast in personal terms.

Finally, it is possible to diminish confirmation bias by asking a person (or oneself) to justify a preferred point of view with relevant evidence and logical coherence. In other words, ask yourself why you hold a given perspective, and review the evidence you gathered to come to that point of view. Indeed, when we know we will be held accountable for the views we express, we tend to be more circumspect when gathering and interpreting information (Jonas et al., 2001).

So what’s the point?
Following these recommendations could not only help us avoid confirmation bias, but would have the added benefits of aiding us in becoming more tolerant of multiple and varied points of view, better articulating our own beliefs, and making us better informed consumers and critics of media and news outlets.

While critical debate and discussion can advance the public’s understanding of a topic, emotional appeals and defensive antagonism can hinder it. Further deliberation and examination of the facts before we speak or write can help us avoid responding with emotion and malice.

Levitt, S. D. (1994). Using repeat challengers to estimate the effect of campaign spending on election outcomes in the US House. Journal of Political Economy, 102, 777-798.

Steele, C. M. (1988). The psychology of self-affirmation: Sustaining the integrity of the self. Advances in experimental social psychology, 21, 261-302.