Too much pressure can be a good thing. Extreme pressure in the earth’s mantle squeezing carbon together creates diamonds and aids Rihanna’s ability to shine bright like one. It is also perfect for oceanographers to indulge in their favorite onboard pastime, the ceremonial miniaturization of the styrofoam cups. Behold, the emblem of Deep Sea News lovingly drawn upon a polystyrene chalice then shrunk by ocean pressure. At the surface, that cup was 90% air. After plunging to a depth of 1.5 km all the air has been squeezed out, leaving only teeny polystyrene beads*. 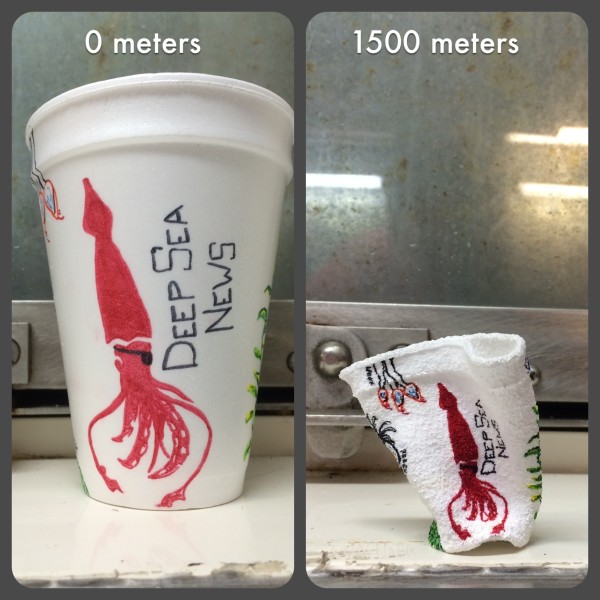 With the awesome powers of ocean pressure, I have squished DSN.

But too much pressure is usually a bad thing. Take for example the recent loss of the Deep Submergence Vehicle Nereus. After watching shattered debris rise to the surface, scientists are pretty sure Nereus imploded, having succumbed to the extreme pressures found at the bottom of 10 km deep Kermadec Trench. 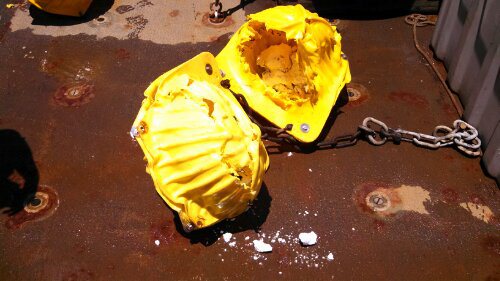 An imploded glass float from a mooring. When a float implodes, the pressure wave will usually cause all the other around it to implode too.

Pressure is also a curious thing. It squeezes you equally from all directions, but its strength only depends on the extent of water in one direction, vertically. The height of the water above you dictates pressure, not the width of the water body you are in. You will feel more pressure on your eardrums diving 5 meters to touch the bottom of an olympic diving pool than if you only descended 2 m down in the ocean.

That being said, humans pretty much suck when it comes to pressure. When scuba diving, most of us can only handle about 3 times the pressure we experience from the weight of the atmosphere above us. When pushed, we can go deeper. A crazy Greek dove down to 701 meters to experience 71 atmospheres** of pressure for science, but he had to prep for 43 days breathing a mixture of hydrogen, helium and oxygen gas which seems a little inconvenient. That pretty much means for most of us, 99% of the ocean is unreachable when your only equipment is a speedo.

Compared to the deep divers of the animal kingdom, we look downright aquatically incompetent. I mean whales and seals have collapsable lungs to deal with extreme pressure (not to mention a whole host of other adaptations)! Penguins basically shut down all their organs except for their heart and their brain when doing deep dives. Physiologically, humans got nothing.

Fortunately for humans, our curiosity greatly exceeds our physical abilities and we have figured out how to reach the unreachable. I was surprised to learn that humans have been artificially extending their deep ocean range for over 2000 years via the apparatus known as a diving bell! A simple design, the diving bell is a heavy inverted cup under which a pocket air is trapped for a human to breathe, but it still only worked down to 50 meters. The diving bell was first described by Aristotle in the 4th century BC

“…they enable the divers to respire equally well by letting down a cauldron, for this does not fill with water, but retains the air, for it is forced straight down into the water.”

and were even used by Alexander the Great in the siege of Tyre***! Eventually our technology improved, giving us SCUBA, submersibles, and the underwater fight scene in Thunderball. And we kept diving deeper. 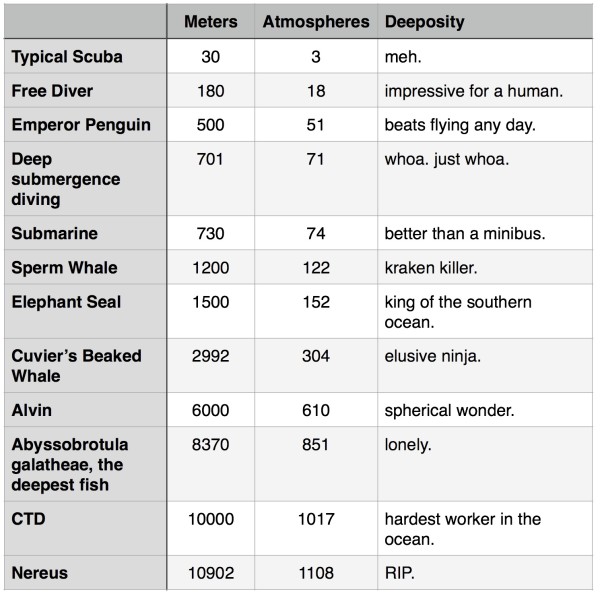 Depth ratings and deeposity (a totally subjective measure of their deep sea prowess made up by me) for various deep sea items.

This brings us down to the deepest reaches of the ocean. Below 6000 m, in deep ocean trenches, lies the hadal zone. Here water pressures are a crushing 600+ atmospheres. Fish can’t even survive beneath 8200 meters because the pressure literally crushes the proteins they need to function. But other creatures such as amphipods, jellyfish and sea cucumbers can survive where fish can’t, we just don’t understand how. These conditions are so challenging that humans have only made two trips to the deepest spot in the ocean, Challenger Deep.

I’ve never thought about pressure so much before. To me it has been a means to estimate depth in the ocean or something that I need to protect my instruments against. But pressure is the major impedance for humans when it comes to exploring the deep ocean. Humans didn’t even make it there until 1930 when William Beebe and Otis Barton descended to 435 meters in their Bathysphere.**** There is still an awful lot to learn down there in the abyss and I can’t wait for all the innovations that will protect against pressure’s crushing clenches so we can keep on exploring. 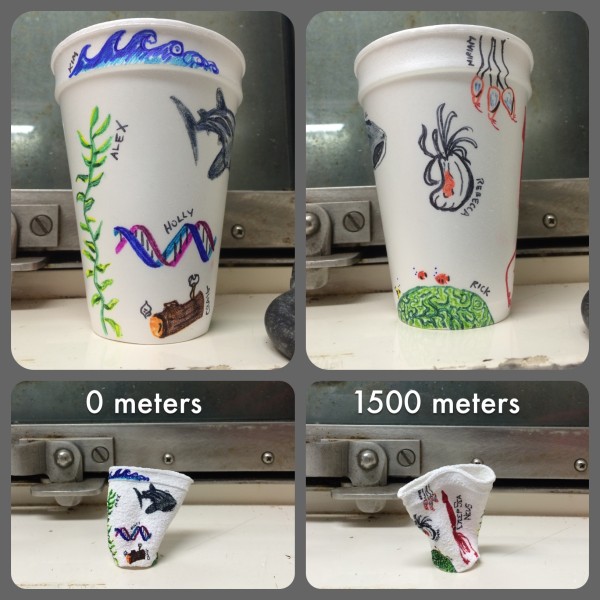 Bonus backside of the cup, all the DSN deeplings.

*Don’t have a ship and a half mile of cable to crush a cup? Don’t worry you can do it at home with a pressure cooker.

**An atmosphere is a unit of pressure, which is equal to the average pressure exerted by the atmosphere at sea level.

***The history of diving bells is seriously fascinating and I completely recommend the “Stuff you should know” podcast on the subject.

**** Fun fact: It took only 30 years between when William Beebe and Otis Barton first made it to the deep ocean in their Bathysphere, to when Jacques Piccard and Don Walsh reached bottom of the ocean at Challenger Deep in Trieste. It then took another 52 years until James Cameron returned to Challenger Deep.