UPDATE Jan 2015: Turns out, the great El Niño of 2014 may never actually materialize. And if it does, it’s probably going to be wimpy. Why all the confusion then? El Niño is a coupled ocean-atmospheric phenomena, meaning that each depend on the other. Right now the ocean is acting all El Niño-esque, while the atmosphere is not. This is leading to some disagreement whether right now the Equatorial Pacific is in a wimpy El Niño state or just none at all.  That’s because different groups use different metrics for defining an El Niño (usually a combo of atmospheric and oceanic properties). Depending on what they use, some groups have already called it El Niño, while others have not. For right now, I’m just gonna sit back with a bowl of popcorn and let the experts decide.

At the beginning of the summer, climate forecasters were forecasting that 2014 would be the year of another El Niño. And it was ominous, because El Niño will do things to the weather. THINGS I TELL YOU. Here is Chris Farley perfectly capturing how the media wants you to feel about El Niño*.

Since then, the probability that an El Niño will happen has been downgraded to a not-betting-all-the-benjamins-on-it chance of 65%. While there are many factors that cause El Niño, a big reason for the downgrade was the absence of a particular feature….one of my favorites…wait for it…the lack of a wave called the Equatorial Kelvin wave!

But before I go all waxing poetic about a wave, I’ll start with describing what the “normal” state of the Equatorial Pacific is. Equatorial trade winds blow from east to west, driving surface currents that pile up warm water near Indonesia in a big ol’ heap known as the Pacific Warm pool. As the trades blow over the warm western Pacific they pick up warm moist air, sending it high into the sky until it comes raining down in buckets on all those warm tropical islands that lurk there. On the other eastern of the Pacific you get the cold tongue, a protrusion of cold, water that unfurls westward across the Pacific from South America Gene Simmons style.

During El Niño there is a disturbance in the force, the wind force that is. The trade winds weaken allowing warm water to flow eastward to South America like an overflowing kiddie pool, obliterating the cold tongue by stopping deep, nutrient-rich, cold water from rising to the surface along the eastern coast. Rain, which is a not a leader but a follower in this dynamic, shuffles eastward with the warm pool. All this causes problems for countries on the South American coast. Severe flooding in Peru and Ecuador. Crashing fishstock. Even fertilizer production takes a hit. No nutrients means no fish means no sea birds means no poop means no more prize winning roses for grandma. Yes, El Niño makes grandmas cry.

Very conveniently, the NY Times just posted this gorgeous short video about El Niño which pretty much sums up everything I’ve said above

Now that we know what El Niño is and is not, let’s talk about what causes El Niño. And OMG we’re here at the wave part! The EQUATORIAL KELVIN WAVE part that is! These babies are super big, super fast and super awesome. If you watch the video below, you can occasionally see a red streak shooting from left to right across the equator in the Pacific. THOSE ARE KELVIN WAVES.

And this is how these waves help set up the ocean for El Niño to strike!

First there is a trade wind slip…

A brief weakening of the trade winds acts, called a Westerly Anomaly, creates Kelvin Waves. It’s sort of like someone used a giant paddle to push on the western Pacific and start the wave like motion.

They rocket eastward along the equator towards South America. Kelvin waves are strange beasts. Their physics allow them to only propagate along a wall such as the continental slope or in the case of equatorial Kelvin waves, the equator is the wall. The wave crests and troughs spread out both north and south of the equator, but the wave is forced to travel eastward along it by the Coriolis force.

which makes the thermocline dip.

Wait! What’s a thermocline? The thermocline is loosely considered the boundary between the upper and lower ocean. More rigorously, the thermocline is a layer of the ocean where temperature (thermo-) changes (-cline) rapidly (cline). As Kelvin waves pass by, it causes the thermocline to move up and down just like a surface wave, but each undulation takes about 1-2 months. It’s this undulation that depresses the thermocline when Kelvin waves get to the South American coast, weakening upwelling and causes sea surface temperatures to rise. This small change in sea surface temperature actually changes the atmospheric pressure gradient across the Pacific and weakens the westerly trades, setting up conditions ripe for an El Niño.

In February, scientists got really excited because an epic Kelvin Wave shot across the Pacific. It was even larger than those observed before the very strong 1997-1998 El Niño! While a beast, that Kelvin wave couldn’t do it alone. What was needed was a train of several Kelvin waves over the course of a year to get the brew right, but the ocean decided to be a sad panda and just didn’t deliver….until now.

Over the past month another Kelvin Wave has formed and is headed towards South America. So far it is setting up the right conditions: depressing the thermocline, cooling the eastern Pacific. The appearance of this Kelvin wave has certainly upped the probability of an El Niño by a couple of percentage points. But it’s also uncommonly late for these conditions to occur making it unclear whether this wave is *the one* that will start El Niño. This could be a story of a little forcing too late. In any case, I’ll just keep watching these Kelvin waves trying to find an answer.

The IRI ENSO forecast has just updated the probability of an El Niño to over 70%! And that Kelvin wave that I show above is to blame. I’ll just leave this right here….. 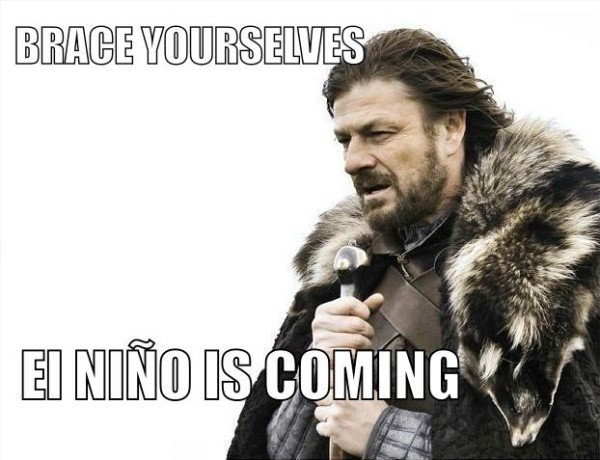 *Chris Farley has also forever awesomed any mention of El Niño in an academic setting for me, because it’s all I envision once the phrase is muttered. And for the record, El Niño is not a storm. And niño is spanish for the child.

12 Replies to “To El Niño or not to El Niño, that is the question”