Squids often form schools.
But cuttlefish (or seacuttles if you will)…they outright just don’t get along with one another. In the video below two Giant Australian Cuttlefish males that are bit cranky fight over a female. They are both flashing the characteristic Zebra “Don’t F**K With Me” pattern.  Make sure you watch after 2 minutes when they really throw down.
So cuttlefish really only come together to fight and sex each other up. But a group of scientists recently have reported that in at least one species of cuttlefish schooling occurs. 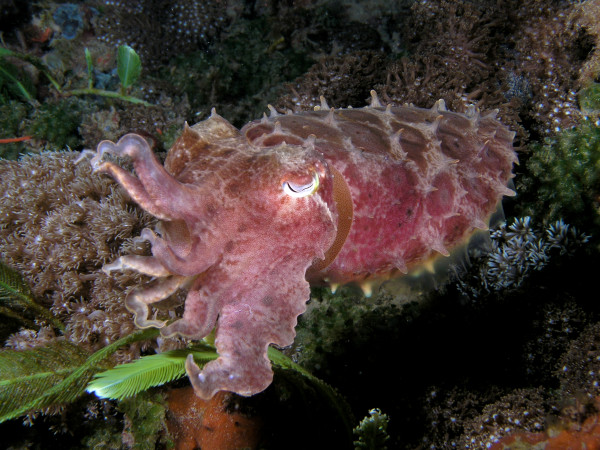 The broadclub cuttlefish (Sepia latimanus) occurs all over coral reefs across the Indo-Pacific oceans.  In August of 2013 on a reef slope of the coast of Okinawa, Yasumuro and colleagues observed groups of 2-9 members comprised of individuals of similar body sizes.  The groups gently and continuously changed in their shapes between clusters and lines.  The cuttlefish synchronized their movements, equally space themselves, and oriented in a similar direction. In other words, they were schooling.  In larger schools, approximately half the cuttlefish would look in an opposite direction.  They were sort of hipster squid looking in the opposite direction before it was cool. Interestingly, bigger cuttlefish were followed by smaller cuttlefish.  Yet overall most of the cuttlefish were small to moderate sizes.  Larger and potentially crotchety adults never schooled.

Why the schooling?  Protection?  The schools all exhibited hunting behaviors.  Schools were either pursuing prey with rapid swimming, first and second arm pairs raised or extended, and finally tentacles ejected form the tips of arms to strike prey.  The schools also lured with individuals swimming with the first arm pair raised and swaying left to right to attract prey while simultaneously darkening the second arm pair tips while waggling the third arm pairs.  Yes its a complicated dance.  The schools may serve as hunting parties that can find and capture food more easily likes squishy, aquatic lions on the savannah.

So now that we know cuttlefish school, we need a name for the collective unit of cuttlefish.  I personally have always favored a squadron of squid over a school of squid.  Post your creative names in the comments below.

21 Replies to “So what do you call a group of cuttlefish?”