Hi lovely internet. I’ve noticed lots of folks getting really excited about a new video going viral. Many are calling this giant strange worm a pyrosome. Now, I love pyrosomes. I’ve written about pyrosomes and am very honored that news sites are quoting my article in their coverage of this video. Thank you. It means a lot and I’m impressed at the amount of good information out there. The thing is, I don’t think this is what you think it is.

Apparently, a Reddit user identified this animal as a pyrosome. I’ll be the first to admit, identifying long blob animals is a rather esoteric art, and ‘pyrosome’ is a good guess. However, let’s take a closer look at this video. Here’s a screen cap showing a close-up of the mass: 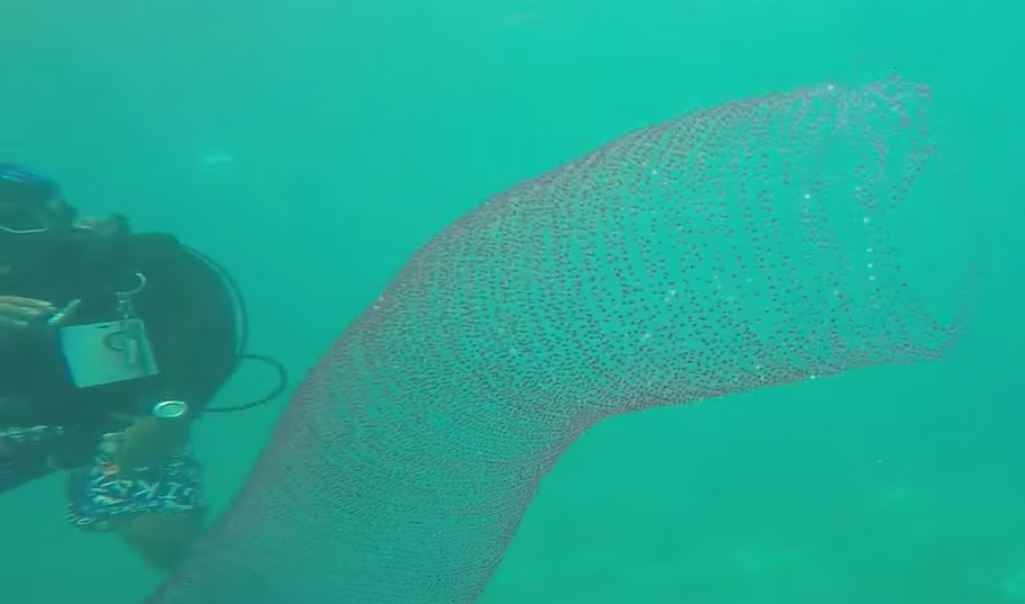 Notice that’s is really transparent, except for long thin dotted pink lines swirling around the mass. The whole structure appears quite fragile. Now take a look at these next two pictures and ask yourself which looks more similar:

The picture on the left is a close-up of a pyrosome (from this video*). It looks rather sturdy, it has some meat to it, and if you watch the video (starting at 0:10) you’ll see it’s quite robust. The zooids, or little swimming bodies of the pyrosome, are not arranged in nice lines, they’re sort of scattered. The animal itself is not particularly see-through, though it’s a little bit transparent. The picture on the right, in contrast, is a close-up of a diamond-shaped squid (Thysanoteuthis rhombus) egg case (which I wrote about here). The egg mass looks quite fragile, it’s almost clear, and there are lots of little pink dots arranged in swirling lines. Transparent, pink dots in long thin swirling lines, fragile in appearance–check check check, and check.

Now, putting a positive ID on an organism from a video is no easy task. Still not convinced? Check out these additional pictures of diamond-shaped squid egg masses [1]: 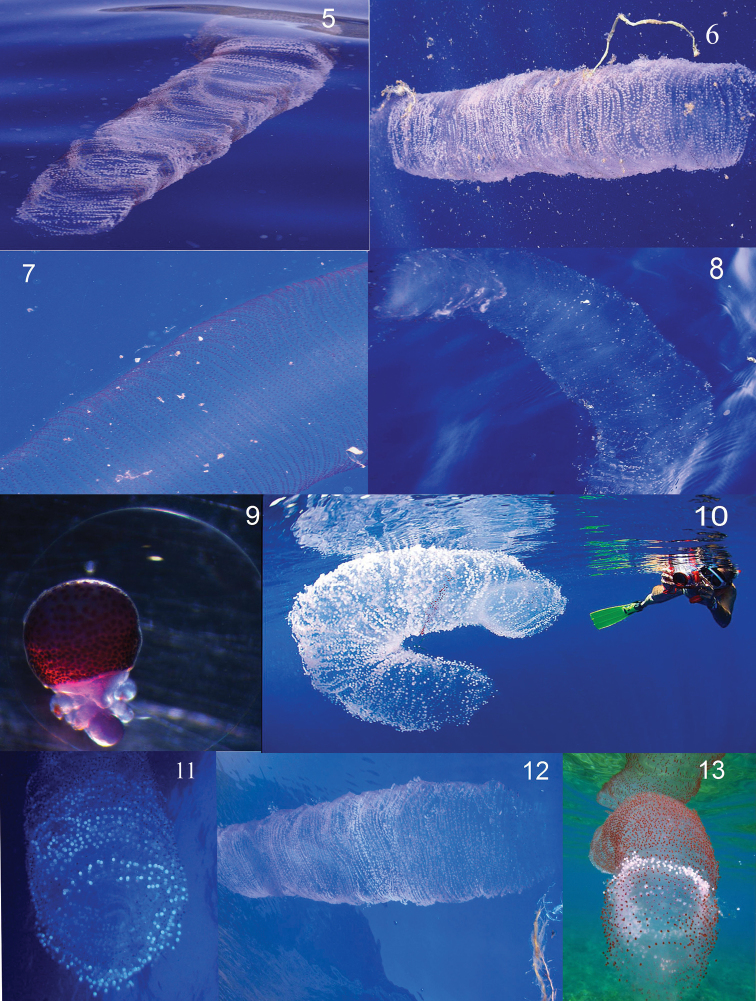 My professional opinion? This video is not of a pyrosome. But does this make it less exciting?ABSOLUTELY NOT! If anything, this is more exciting. These egg masses are incredibly rare. The adults are large (1 meter in length and 30 kg) but elusive, and lay these eggs in the open ocean. This video is one of the best I’ve seen, and certainly one for the record books. If I were there I would have been screaming with joy through my regulator. I hope the divers know what a lucky sighting this was. And next time I hope they invite me, because I’d love to see one of these up close. (and I’d really love to be diving in shorts right now!)

*This video actually shows shows both a pyrosome and an egg case. Watch for the egg case in the second half of the video.

If you’d like to learn more about diamond-shaped squid (Thysanoteuthis rhombus) or their egg masses, check out these two great papers

5 Replies to “What’s this viral video mystery blob? (hint: it’s not a pyrosome)”