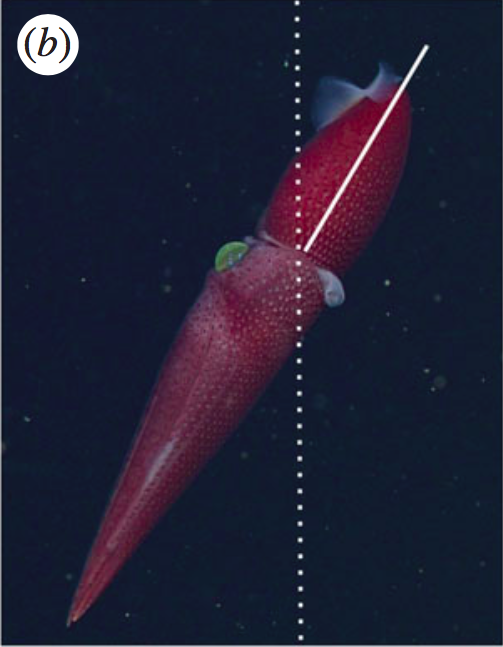 The 18 species of Histioteuthid squids, the biggest no larger than a football, are often strawberry colored, with dark photophores resembling black seeds adding to the sweet fruit-like appearance.   All the species live in the mesopelagic, that region in the ocean between 200 and 1000 meters that goes from dimly lit to a full on dark habitat.  Light comes from above in the form of attenuated sunlight and below in the form of bioluminescence.  Given the drastic changes in light with depth, the mesopelagic is filled with a cornea-copia of truly amazing, dare I say monstrous, visual adaptations.  The Histioteuthid squids are no expectation.  The left eye can be twice the diameter of the right eye, a trait only acquired with adulthood.  The left eye can gain such proportions it actually pushes the head out of alignment with the squid’s body in some species.

New work by Kate Thomas and colleagues reveals why these strawberry squid’s different eyes have made such a spectacle of themselves.  The group found that the squids oriented the enlarged left eye upward and the smaller right eye slightly downward.   The squids often held a slanted angle with their body so the eye looking upward was near 45˚ and the downward near 120˚.  Given the field of view of the eyes, the large eye would receive light from directly above to 90˚ horizontal on the left side.  The small eye from 43-198˚ or from directly below to horizontally on the right side.

To keep these eyes aimed in the right area, the strawberry squids also demonstrate a peculiar behavior.  Squids would ratchet themselves, turning the body while the head maintain the same orientation.  The head would, at a precise stopping point, suddenly snap around to match the body orientation. “This may allow histioteuthids to compensate for the unbalanced fields of view created by [different sized] eyes and rapidly change which direction each eye is facing, or to scan their environment.”

That large eye appears to be specifically geared for gazing toward the ocean surface, searching for other creatures against the dim sunlight.  The team also found the large eye was often yellow, serving as filter that helps break up counterillumination camouflage.  The small eye is dedicated to scanning the dark depths below for sudden flashes of bioluminescence.

But why two different eyes?  Thomas explains, “Eyes are metabolically expensive to grow, maintain, and use, so while larger eyes can improve both sensitivity and resolution, selection probably favors an eye just large enough to perform a necessary visual task but no larger.”  It is actually cheaper, in the total calories needed sense, to have the eyes perform to unique functions and allow one of them to be itty bitty.

And with that, my friends, eye take my leave.

One Reply to “The Little Strawberry Squid with the Big Eye”