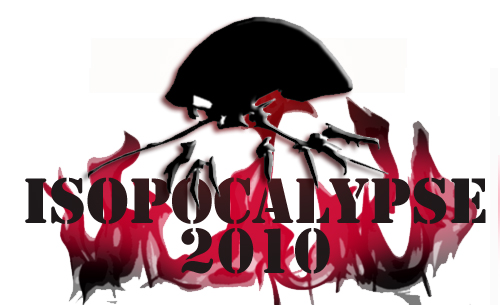 Across the internets a craze is sweeping.  We here at DSN are calling it Isopocalypse 2010 (stay up to date using the Twitter hashtag #isopocalypse2010).  Things got so crazy over the last two days with giant isopods that in my excitement I forgot what year it was and used #isopocalypse2011 hashtag this morning

I work for a Sub-sea Survey Company, recently this beast came up attached to one of our ROVs. It measures a wee bit over 2.5 feet head to tail, and we expect it latched onto the ROV at roughly 8,500 feet depth. Unfortunately, the e-mail that these pictures were attached to came from a contractor, and the ship he was operating from (and therefore location) is unknown, so I can’t tell you what part of the Earth this beast was living.

Word from an email I received is that the ROV was submerged on the West Sirius Oil Rig in the Gulf of Mexico. The picture that accompanied the post…

Fox News hit the scene with Terrifying Sea Critter Hauled from Ocean’s Depths in which several heinous errors were made. First the piece refers to it as a “crablike creature”.  First isopods are in the Order Isopoda and crabs are in the Order Decapoda.  Although both are crustaceans, this statement is the equivalent of saying an elephantlike bat. The Fox article proceeds to cite our old giant isopod post over at ScienceBlogs instead the posts on giant isopods here at the new improved DSN.  The Fox story also cherry picks from original post stating that I posted that their large size is related to temperature.  Reading the actual post you will see that I clearly state others proposed this and that I believe the size to be an adaptation to living in the food-limited deep sea (as I have proposed for other deep-sea invertebrates, press coverage here).

Alternatively, the larger size also increases fasting potential because greater fat reserves can be maintained. Larger size also confers a greater foraging area, important for either a scavenger or a predator.  Both of these are important adaptations in the food-limited deep sea.

Unfortunately these errors were also perpetuated by National Geographic. Come on Fox News! Of course this is not nearly as annoying as legitimate news sources citing unsubstantiated wikipedia information as a reference.

Really wacky is the supposed diet of the Giant Isopod. “They feed on the carcasses of whales, giant squid, and other large sea creatures.”  It is true that the Giant Isopod is an opportunistic scavenger and is known to feed on the carcasses of other organisms. But compare the previous information on the diet compared to that of Kevin on his thoroughly researched but apparently ignored post.

Gut content analysis of B. giganteus show mostly fish fragments, as well cephalopod, caridean shrimp and galatheid crab remains (3). In smaller quantities, sponge fragments, other isopods, echinoderms, nematodes and tunicates have been found (1, 3)…Most authors agree that B. giganteus is a scavenger (3, 5, 6), but some suggest it is also a facultative predator (3, 6). Specimens in aquaria have survived 8 weeks between feedings (5) and it speculated that this may be an adaptation for carrying its brood, which would be severely impacted by a full stomach (3)…B. giganteus has also been collected from baited traps outside of methane seeps in the northern Gulf of Mexico (11).

Giant squid?  Where did that come from?

Of course I also have a problem with people referring to this beloved creature as a terrifying sea beast, terrifying sea creature, a sea roach or cockaroach (a comparison even worse comparing it to a crab), and monster or prehistoric creature that led on person to say ““KILL IT!  KILL IT WITH FIRE!  OH GOD OH GOD GET IT AWAY!”  Giant Isopods are magnificent creatures nothing short of an spectacular evolutionary trajectory.

Another error is “Fossil records date these cockroaches of the sea back more than 160 million years, before the Earth’s continents were even formed.”  Where did that information come from?  The idea of a old and ancient deep-sea organisms has long ago been dispelled.  The lack of deep-sea fossils, especially of large organisms, past 100 mya also flags this statement.  Indeed, I think we can reasonably say we know little of when Giant Isopods emerged in time.

Of course the other interesting thing to emerge from these stories is all the interesting titles bestowed to me. My favorite: “deep-sea biological systems expert”.  Of course I prefer high commander of deep-sea science. Discovery News labels me as a postdoctoral fellow with MBARI, a position I haven’t held for well over a year. Wait a minute didn’t we use to work for them?  Shouldn’t they know?

Of course, Kevin on Twitter wonders “Wait, can I be quoted without ever having been interviewed??” Which brings me to the next point…

Thankfully Alan Boyle comes to the rescue. He actually interviewed me.  Yesterday Alan and I had a great discussion about Isopocalypse 2010. But Alan should also be commended because he did research. Other reporters take note, it is called research and you should do it. It is hard for scientists to not feel frustrated by the lack of accuracy on major points of the story. Overall, it leaves me wondering how issues like this help deteriorate any bridge between scientists and the media and degrading our trust in you.

Hat tip also goes to Alan for linking to www.deepseanews.com.

[UPDATE #1] Isopocalypse 2010 may have claimed its first victim…me.  The Sun states “Prof Craig McClain, of North Carolina’s National Evolutionary Synthesis Centre, said: “Some are even bigger. No one from The Sun ever spoke with me. As such, I am little unclear of how they could obtained a direct quote from me.  Moreover, given my comments above you can clearly see that I believe quite the opposite.

[UPDATE #2-KZ] AOL News attributes a quote to me “Notes Deep Sea News blogger Kevin Zelnio, “the maximum reported size of Bathynomus giganteus is likely to be an artifact of our sampling.” though never talked to me. If they are quoting from one of our many giant isopod related posts I do not know since they did not link to any particular post where I might have said. In fact, I had to track it down and it was in a comment on Dr. M’s post about isopod body size evolution. le sigh…

[UPDATE #3]  The woo continues at Mail Online. No sources are cited for the information and most of the statements are factually incorrect.  “Many deep-sea crustaceans and invertebrates tend to be larger than their shallow-water counterparts. It is not yet known whether this is due to the colder temperature, higher pressure or scarcer food resources.”  Actually, many deep-sea invertebrates tend to be smaller their shallow water counterparts.  Thiel was the first to document this overwhelming trend in 1975. As to the second part, again although temperature is posited as the reason for deep-sea gigantism there is little to no support for this conjecture.  Deep-sea miniaturization is the norm and exactly opposite of what you would expected if colder temperatures where driving size.  In addition and as mentioned above, changes in body size are still observed in organisms in the deep sea even when temperature does not vary.  No body has ever posited pressure to control body size and I cannot even think about how this mechanism would work.

Of course you will also want to see