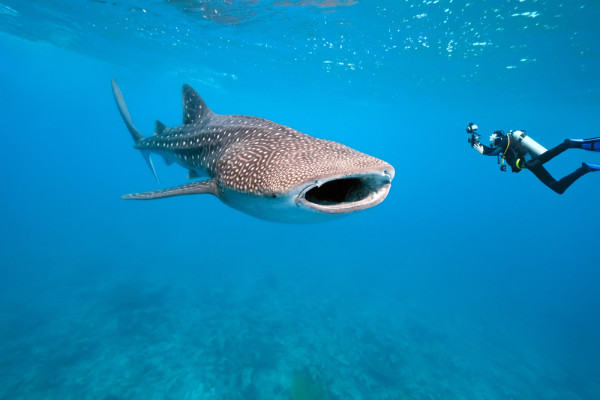 Whale sharks won’t be the only big ass vertebrate in the waters off Mexico come August!  I’ll be joining Para_Sight and team for the Afuera, the massive aggregation of whale sharks in the Mexican coastal waters of the Caribbean Sea.

Admittedly in some regards this opportunity represents a departure from my research on much deeper, smaller, and spineless organisms.  As anybody knows, I’m fanatical about body size. I’ve long been interested in why some animals obtain such large sizes and even more interesting why massive animals don’t get larger.

So do whale sharks only reach lengths of around 40 feet and 20 tons?  Why are there no superwhale sharks?

With the largest known individual at over 20 tons, the whale shark, Rhincodon typus, is the largest species of living fish.  The basking shark, the second largest fish, Cetorhinus maximus can weigh as much as 19 tons. Both species, along with megamouth sharks, are the only known species that live by filter feeding.  The largest of the carnivorous and predatory sharks, the great white shark, Carcharodon carcharias, is nearly an order of magnitude smaller at a mere two tons.  How has this unique lifestyle, among sharks, allowed sharks and other groups, like whales, to obtain such extreme sizes? But does this lifestyle also present an evolutionary barrier preventing no sharks bigger than this?  Perhaps there is simply not enough food.

So with all we will concentrate our efforts on observing feeding behavior, biomechanics, and energy allocation of Rhincodon typus as well as the concentration and distribution of their primary food source.  Combined this information will yield insights into the evolution of body of one of the ocean’s largest animals.

Special thanks to the Georgia Aquarium for the opportunity  and Air Tran for the airfare!

6 Replies to “Why are whale sharks so small?”