Al and I spoke previously about how for too long ocean exploration has suffered from chronic underfunding and the lack of an independent agency with a dedicated mission. We called for the creation of a NASA-style agency to ensure the future health of US ocean science and exploration (Read Part 1, Part 2, and Part 3).  In Part 1, I spoke about declining and stagnant funding for ocean science.  To further drive this point home, I collected data on grants from NSF’s Biological Oceanography Program.  For background, this is the primary program within NSF that funds marine biological research.  What the program has funded is public domain and available here.  Pop me line on Twitter @DrCraigMc if you want the raw data, pivot tables, and figures. 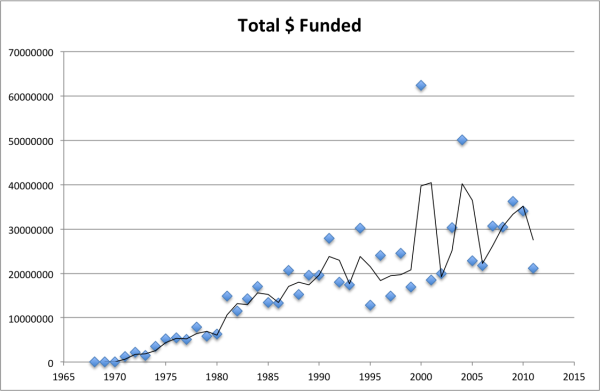 The above chart displays the total amount of dollars per year that went to funded grants.  You can see there was growth throughout the 1970’s and 1980’s, followed by relatively little change in 1990’s, and some increase in this decade.  Admittedly, the change  during this decade is not sharp and recent highs in the later part of this decade are largely due to a one time burst of funds from Obama’s stimulus package.  Two points of interest are 2000 and 2004 where total funding was larger than any other year prior or after. In 2000 the total funds were $62,433,190. This seems to be distributed pretty evenly across a greater number of grants with a few being really large including the GLOBEC Long-Term Observation Program in the Marine Ecosystem of the Northern California Current and an award to the University of California San Diego for four oceanographic research vessels operated by Scripps Institution of Oceanography. 2004 reflects the $35 million grant awarded to Woods Hole Oceanographic to rebuild the Alvin submersible. It would be interesting to know what caused the peak in funding in 2000.

You might argue there has been a slight increase in funding for marine biology or at worst that levels are remaining about the same for the last decade or so.  But let’s drill into the data further. 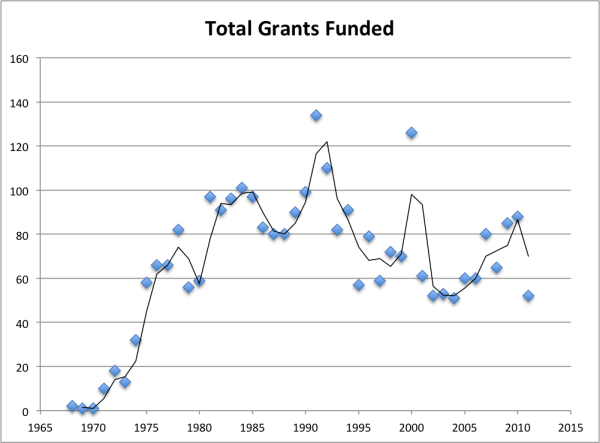 If we look at the total number of grants, a steady decline since the early 1990’s occurred. Of course 2000 is an exception again and so is the the recent rise due to the stimulus package.  Of course note that 2010 is one of the lowest years since 1975.

But what about the average dollar amount per grant? 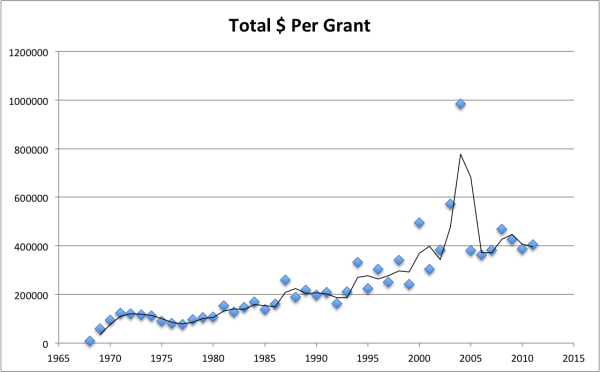 Again with 2000 and 2004 as outliers, the average grant amount as steadily increased.  In the last decade the amount has remained about the same.  To restate, the average amount of any single grant has increased but the number of grants funded has decreased and the total NSF amount of funding for marine biology has at best only slightly increased.

There are two possible explanations for this pattern of fewer grants with larger budgets.  One, there has been a move toward more collaborative, multi-investigator grants.  I am not sure there is strong evidence for this as biological oceanography, and oceanography in general, has historically relied upon scientists collaborating on large oceanic projects. Second, and more likely, is that increasing costs mean any scientist will be requesting significantly more funds.  Personal, equipment, and fuel all have risen in price.  Universities now typically charge 50% for indirect costs (funds added to a grant budget to support indirect university administrative and facilities support and not directly the science) as opposed to closer to 20% a decade or two ago.

To put this in perspective, consider this final plot. 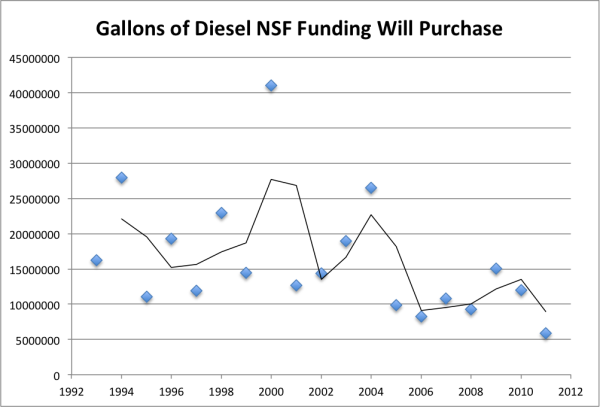 As a metric for inflation, I gathered information on the average price for a gallon of diesel since 1993.  It is clear in the last two decades that the total amount of fuel that the total annual NSF Biological Program funding will cover has steadily declined.

So where does this leave the future of marine biology in the United States? I hope it looks like this.

3 Replies to “Four Decades of Funding of U.S. Marine Biology: Are We In Trouble?”