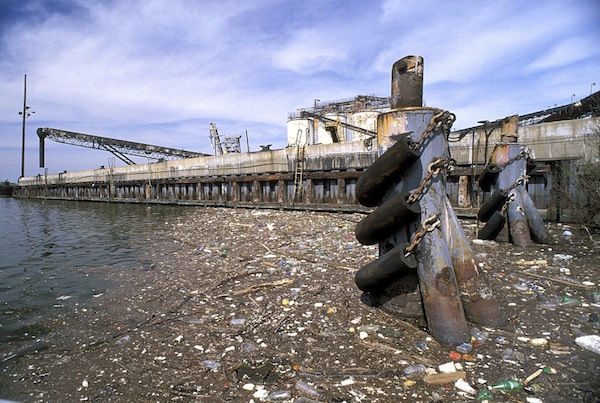 When we see images like the above it is hard to believe the ocean inspires us. In one of the most striking examples of our connection to the oceans, if humans, any number of us, live within 200 kilometers of a reef there are effectively no sharks.  This is not the behavior and these are not the actions of a species inspired by the blue around us.

In my favorite view of Earth, centered on the equatorial Pacific Ocean, virtually no land can be seen.  Although cliché to say, we do live on a blue planet.  So we must ask, how could the ocean not inspire us?

The environment influences us in profound ways, an argument so well articulated by Jared Diamond in Guns, Germs, and Steal.  For example, Diamond argued that a plentiful supply of food lead to dense populations that in turn supported a division of labor and more complex societies to form.  Another of my favorite examples, one garnered from working on an undergraduate degree in religion, of environmental influences on humans concerns how different cultures view life after death.  In the Abrahamic religions, originating in arid environments, hell is characterized by extreme heat.  In contrast, among Inuits their equivalent of hell involves extreme cold.

Maybe we are just missing the connections

Perhaps we just need to take pause to truly witness the ways our oceans impact our popular culture.  And when we do so, we realized the evidence is really all around us.

A search of Etsy on my favorite organism, the Giant Squid, returns over 350 handmade items—a potpourri of painted, crocheted, stenciled, etched and sewed items inspired by one of the ocean’s largest denizens.  A search for “ocean” returns well over 140,000 items ranging from starfish shaped soaps to a crafted wooden marlin to iPhone cases featuring the beach.

But it is not just arts and crafts we adorn with images of the ocean.  We decorate our bodies as well.  A search for “ocean tattoo” using Google Image yields 54,000,00 images and searching for “ocean life tattoo” yields 12,700,000.  Whereas not all the images appear to be of actual tattoos, there is no shortage of body ink inspired by the ocean and the life in it.  Nor am I convinced that all these tattoos are from marine biologists or of dolphins (doing a search excluding dolphin still yields 52,600,000).

I believe these examples begin to hint at a society where the ocean consumes our thoughts and activities.  Indeed for many the ocean defines our rest and renewal.  I was inspired to investigate this when friends mentioned mid-month about an upcoming trip to the Bahamas.  It was a trip that makes us all envious–a week of relaxing on the beach.  If you use Google Trends you can see an annual cycle where people begin searching for the term “beach” at the beginning of year, peaking late summer, and diminishing until the end of year when the cycle repeats.  Interestingly, searches for “beach” are even more popular (5x) than “ocean”.  Both are more popular than Googling for “Justin Bieber” (nearly an order of magnitude greater).  On Twitter, the hashtag #beach yielded 792,120 tweets in the past month alone.  Some of my favorites are below.

We also must not forget about internet memes, the way we disseminate information (loosely defined) often humorous and frivolous.  LOL Cats must move over for Sad Shark, Shellfish, and the Intertidal. 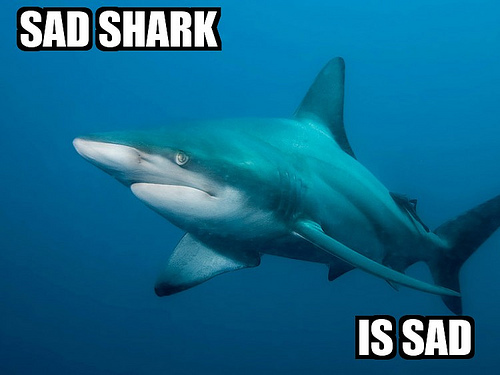 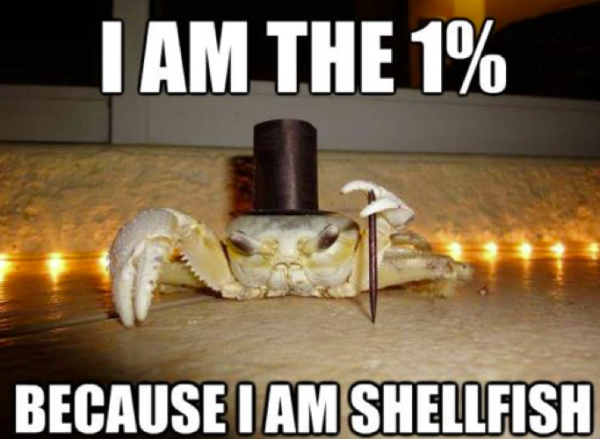 And another example exists in high fashion.  We need to look no farther than Versace, Mary Katrantzou, and Stella McCartney ‘s Spring/Summer 2012 collections. As Holly mentioned,  “This season the runways were flooded (ha!) with ocean-themed prints and marine-inspired design.”

When my wife and I recently bought our first house, our first major task was to repaint.  For our bedroom we settled, largely under my urging, on Vintage Map, the color of oceans on charts of yesteryear.  However, there exists a multitude of greens, blues, and even oranges (Ocean Sunset) that are inspired by the beautiful hues of the oceans.  And when choosing the colors for furniture, floor coverings, and other essential decorative elements we can continue to draw on the ocean.  Nudibranchs, provide a wonderful palette of colors to choose from, all coordinated by nature herself. 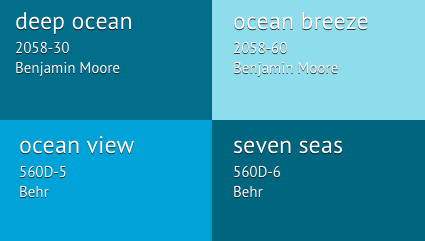 From Jaws, Abyss, Life Aquatic, and Finding Nemo, there is no shortage of ocean themes enlivening our contemporary cinema.   I am admittedly biased but my favorite movie of the last decade was the Life Aquatic inspired by the films and life of Jacques Cousteau.  Nothing is more iconic of Cousteau than the red beanie, worn by the characters in Life Aquatic, and now countless others seeking to connect to the ocean legacy of Cousteau.

Although these examples are focused on pop culture and may seem whimsical and fleeting, they are reflective of a very deep seeded connection to the ocean, one that runs the course of history both as a nation and a species.

And thus we are left with a remaining question…

Why can we not turn this deep seeded connection to the ocean into more successful ocean conservation and stewardship?

3 Replies to “Making The Connection: The Oceans In Contemporary American Culture”