Here’s your recap of the top excretion-related news in the past few weeks, and what it means to our ocean world: 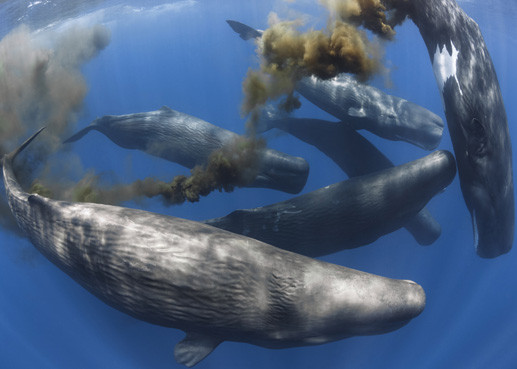 Mo’ Whales, Mo’ Poop, Mo’ Plankton, Mo’ Whales…
Several recent studies emphasize the ecological importance of whales and the whale-sized dung they create. Whales defecate at the surface when they come to breathe, and this massive fertilizer dump is an essential key to their planktonic food web. Tiny single-celled algae are the basis for this web, which need lots of iron, nitrogen, phosphates, and other nutrients to reproduce and grow, and whales provide this literally by the ton. Algal blooms provide food for smaller planktonic animals, which are fed upon my krill, fishes, and other small prey whales eat. Since algae need sunlight to photosynthesize and thus can only live in surface waters, whales obligingly bring their delicious, nutritious waste right to them.

Implications of these reports are startling in two ways. First, they strongly suggest that previous studies of whale populations, and the resulting models of ecosystem sustainability, may be way off. It had always been assumed that whale populations were limited by planktonic productivity, which allowed for harvest of those pesky ‘excess’ whales. Instead, it is clear that an increase in whale populations – and their corresponding increase in fecal input – may actually lead to an increase in plankton biomass. Which leads to more whales. Which leads to more plankton. Etc. So today’s global whale populations are likely a fraction than were sustained in pre-whaling days. Moreover, worldwide increases in plankton biomass could increase absorption and storage of atmospheric carbon, acting as a buffer to help mitigate climate change. Feces CAN make a difference, and just when you almost gave up on this whole climate change thing.

Parrotfish Feces: Healthier Reefs and Nicer beaches
The International Union for Conservation of Nature (IUCN) recently released a report stressing the need to limit fishing of parrotfish on Caribbean tropical reefs as a way to preserve and restore corals. It works like this: coral reefs are constantly under threat from being smothered by faster growing algae. Most reef fish are herbivores and can mow these algae, but parrotfish actually scrape algae completely off the corals by nibbling them with a beak of hard, tiny fused teeth, and often they will also lop sizeable chunks of dead corals to eat other teensy invertebrate organisms growing on them. Using a second set of jaws in their throat, the ‘pharyngeal mill’ grinds these coral bits into sand that is digested and excreted as intestinal waste that flows out of their cloaca like a sparkling satin curtain.

Parrotfish are keystone species instrumental in keeping reefs healthy, and where these colorful fish are abundant and diverse, reefs thrive. Where they have been overfished, reefs decline, and in the Caribbean, reefs have disappeared by 50% since the 1970s. Parrotfish leavings produce the creamy white coral sand beaches at your favorite tropical vacation spots. Yes, the best beaches are made almost entirely from decades of crap exuded from thousands of parrotfish. Let that sink in for a minute. As well, these sediments also make a variety of microhabitats for other marine organisms, and support other major habitats like eelgrass beds. Breaking corals into sand also allows for the calcium carbonate in the corals to go into solution faster, and become available for coral polyps to resorb this mineral and secrete new coral. And the cycle of the reef is complete. But parrotfish are delicious and easy to catch, and are popular aquarium fish, so commercial capture & trade in these fishes is intense, and much to the detriment of the reefs. Calls for protecting parrotfish in the tropics will result in healthier reefs that can better withstand pending climate change & sea level rise, will ultimately foster more sustainable fisheries that healthy reefs bring, and will provide a never-ending source of that soft, gorgeous fecal sand for your vacation pleasure.

Big Bird, Bigger Mess
Unveiled this week were the three million year-old fossil remains and full-body reconstruction of Pelagornis sandersi, and with an estimated wingspan between 20-24 feet, it is allegedly the largest bird that ever lived, and a seabird at that. Much has been stated about this bird in the this press this week, including its possible athletic skills, but nobody has tackled the obvious gastrointestinal question: how much guano would the world’s largest seabird produce?

I solved that mystery in a few quasi-professional ballpoint-on-cocktail-napkin estimations. The fossil bird is said to be twice as wide as today’s ginormous Royal Albatross, but it would also likely have the total mass of four of them. So using a few quick calculations, and not worrying about statistic gobbledygook like ‘variables’ or ‘ranges’ (it’s not like I’m sizing ocean giants or anything), here’s the poop on their poop: Average guano production for birds is 3.2% of their body weight a day. The average body weight of a Royal Albatross is 19 lbs (8.5 kg) = 0.608 lb (0.275 kg) of guano produced per day. Roughly scaling that up, Pelagornis could produce 2.43 lbs (1.102 kg) of guano per day, and a whopping 886.95 lbs (402.31 kg) per year. As with the whales, this cloacal mess is a major nutritional contribution to the local marine productivity that ultimately supported their own sustenance back in the day. What goes out ultimately comes back in, and back out again.