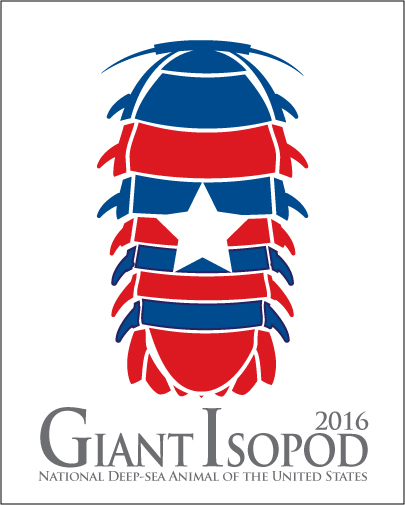 If you are an avid DSN reader then undoubtedly you know our fascination with Giant Isopods. Back in the early days of 2007, I was sharing Bathynomus giganteus videos and pontificating about their large size (and continued to discuss their size).  The iconic species made it on to my list of best species and my bucket list of marine species. The gargantuan roly-polys are even seminal to my career and research focus. I’ve followed their rise into internet and pop culture.

So naturally DSN and I are onboard with the initiative at Southern Fried Science to adopt the Giant Isopod as the National Deep-Sea Animal of the United States.

Andrew Thaler discusses nicely why the Giant Isopod is the perfect American icon for the deep sea and this great country.

(1) The giant deep-sea isopod is a charismatic, iconic deep-sea species commonly found in the deep waters of the United States, particularly the Gulf of Mexico and Southern Atlantic;

(2) The giant deep-sea isopod has attained a level of popular culture awareness in recent years that is unrivaled by most enigmatic deep-sea animals, with a small but persistent presence in art, film, and music;

(3) The first specimen was collected from the Gulf of Mexico in 1879 by renowned American scientist Alexander Agassiz;

(4) The discovery of the giant deep-sea isopod provided important early evidence to disprove the Azoic Hypothesis–that the ocean was lifeless beyond a few hundred feet;…

(6) The giant deep-sea isopod, being at times either fiercely independent or collectively powerful, capable of surviving and thriving in the food-limited deep ocean through tenacity and resourcefulness, models many shared American values…

(8) The giant deep-sea isopod can serve as an Ambassador Species for deep-sea ecosystems within the territorial waters of the United States, inspiring the public to explore and learn about this unseen world.

Are you with us?

Step 1: Go sign the petition. Don’t worry it will take you all of 2 minutes.

Share the post "Adopt the giant deep-sea isopod, Bathynomus giganteus, as the National Deep-Sea Animal of the United States."