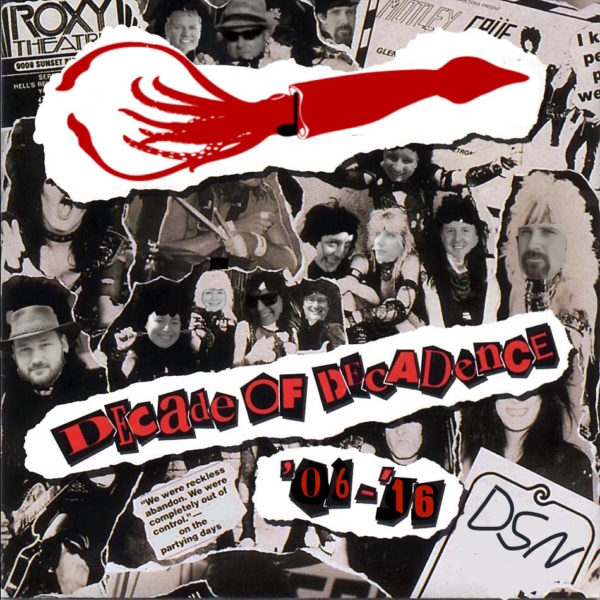 Today is legendary! Why, you ask? Well, we are celebrating TEN YEARS of DSN posts. That’s right – if you go wayyyyyyyyy back in the archives you will note that the proto-Deep Sea News empire began with a little post by Dr. M on December 13, 2006.

What were we all doing in 2006? Well as for myself (this is Holly speaking), I was just starting my PhD research in good ol’ London towne. I was listening to a lot of Pussycat Dolls, and Christina Aguilera was going through that weird jazz phase. I was smoovely fixing nematodes on glass slides to the tune of Chamillionaire, and I had just signed up to this cool new website called Facebook.

As you can fathom, a lot has changed in 10 years. The DSN crew has moved forward and onwards in our careers, many of us metamorphosing from wee little student trainees into Real Scientists™. Our list of contributors has changed and evolved. We write different types of posts now (should we remind Dr. M that he used to use DSN as a cruise blog?). In light of recent world events, our message and mission has become increasingly urgent.

But other things haven’t changed – our Core Values, although not formalized in writing until 2011, have always been a fundamental part of Deep Sea News. The passion, enthusiasm, and dedication of all of our past and present writers will never change. And of course I still listen to the Pussycat Dolls (because how can you NOT?)

So in celebration of our site’s 10 year anniversary, here we present you with our Top Ten (and then some) posts in DSN History:

Kim: Do I need to explain that the very first post on DSN is also that years highlight? It’s real, it’s sweet and it kicked off ten years of online shenanigans!

Jarrett: I <3 DSN in 2007. You can feel the online science world trying to figure out what it was. DSN was a more news-y place, with a heavy dose of reportage on the deep sea, like this awesome interview of sub pilot David Guggenheim. But amidst that, DSN was also figuring out who it was going to become – and this gem of a piece from Peter Etnoyer epitomizes the future, showing us that not only are deep sea fish all around us in our everyday lives, but man, do they sure like to cannibalize their babies. Mmmmmm….babiez.

Rebecca: 2008 was a year or short-and-sweet posts, punctuated by long and well-researched articles on everything from coral age to deep ocean waves. DSN found a unique voice in being a place not just to report on the latest news, but also provide a scientist’s perspective on the way news about the ocean is reported in the press. This was also a year of raising awareness, with Dr. M’s post on pharmaceutical dumping in the deep as a perfect example of how blogs can call attention to unique and important stories that the press might miss.

Holly: My favorite thing about 2009 is the epicness of Kevin Zelnio, best summarized with these two posts:

This post is a HILARIOUS animated video about a very boring sea cucumber, complete with rock guitar soundtrack. I think I just re-watched it like five times.

Thank You for Caring About Ocean Education!

(the more serious and dedicated size of Zelnio, where he coordinated a campaign at DonorsChoose.org and raised over $4800 from our readers. This campaign funded Ocean Education projects in K-12 classrooms around the country!)

All the coverage of the Deep Water Horizon Spill

Kim: Let’s be real, the Macondo well blowout sucked for the Gulf. But in terms of science, DSN was on it providing weekly updates and posting readable summaries of technical reports. The entire archive is here folks.

How To Cuddle Your Lady Right, by Smoove A

In this epic post, Miriam describes how one microscopic crustacean makes all the right moves and makes the mating happen. All biology textbooks should be written like this.

From the Editor’s Desk: The Giant Squid Can Be A Panda For The Ocean

Holly: First of all, I love the 2011 Editor’s Desk posts because Craig very epically summarized himself with a minimalist icon of his bald head and beard. Second, the Giant Squid is WAYYYY more awesome than those damn dolphins and whales that everyone keeps going on about. And I prefer my cuddly mascots with lethal beaks and suckers, thank you very much.

From the Editor’s Desk: The Future of Deep-Sea News

This is the post where we formalized our now infamous core values – they were the brain child of the very first DSN retreat at the Georgia Aquarium, a weekend of meeting rooms and champagne in a rotating sky hotel. One of those things turned out better than the other.

#IamScience: Embracing Personal Experience on Our Rise Through Science

Jarrett: This post embodies DSN at it’s best. Kevin Z. takes us on his deeply personal and emotional journey into science. It’s a kind of story rarely told, and one that so many need to hear.

In this post, Craig connects American history with geological history, and ties it all together to understand how both impacted the 2012 presidential election. This post exploded the internet.

10 Reasons Why Dolphins Are A$$holes

Do I even need to explain?

A field guide to privilege in marine science: some reasons we lack diversity.

When Miriam left DSN, she went out with a deeply important and thoughtful list. If you are an ally and want to see marine science grow, read this piece.

How many people does Kaiju need to eat everyday

Sure we love all the creatures of the deep, but we also love Hollywood’s imaginary beasts as well. Craig answers some serious questions regarding the metabolism of the monsters in Pacific Rim.

In case you didn’t know what Rebecca’s niche in the online ecosystem, this is it. Someone found a giant gelatinous tube in the sea, she identifies it, and the internetz go wild. Rebecca, helping jellies go viral since 2013.

True Facts about Ocean Radiation and the Fukushima Disaster

SPOILER ALERT: unless you live within 100 miles of the reactor, radiation from the Fukushima Disaster is still not harmful. This post was meant to be a guide to understanding radiation in the ocean. It ended up being one of most shared posts ever and the one we received death threats over.

The Ever Increasing Size of Godzilla: Implications for Sexual Selection and Urine Production

Beth: Where Craig discusses the body size characteristics of godzilla over time, and the logical implications this would have on the millions of gallons of urine that massive godzilla would generate. This post has the thing that makes me love DSN – using scientific reasoning to explain a totally ridiculous thing. And it features Craig’s weird obsession with the size of things.

Where Craig uses great metaphors to explain some cool scientific studies on how snails reproduce based on food availability, featuring inappropriate references to rock stars and sex, and with a bonus soundtrack!

Alex: When you get retweeted by NASA… you get a spot on the list.

The worst ocean environments to catch them all

Rebecca: When you love Pokémon but hate crushing barometric pressure.