It’s Shark Week, and the Discovery Channel have already jumped the shark with a fake documentary, asking if a giant prehistoric shark Megalodon is actually still alive. It’s not, and the show was filled with lies, fabrications and actors playing scientists. Here’s a radical alternative idea: I thought I might celebrate Shark Week by telling you some actual facts about sharks. This, therefore, is a collection of my earlier Not Exactly Rocket Science posts on sharks (and a couple of rays, for good measure).

Followig Ed, I went through the DSN archives to pull out all the greatest shark posts from our 8-year history.

Remember the most important fact about sharks is that they can only be found in two places—the northern and southern hemispheres.


What’s in a name? Origins of the word “shark”

One of the first mentions of the word in a dictionary, however,  is in an anonymous work from 1689, which defines a shark as a “shifting knave”. In other words, a crook, dodgy sort or general all-round bad guy.

It’s just not fair.  There I was, a freshly produced sand tiger shark embryo, developing nicely and making my way down the ovarian ducts to one horn of the uterus…Things were looking good.  Head: one, at opposite end to tail – check.  Fins, paired appropriately on the bottom, tandem along the top – check.  Gills – check.  Teeth – check.  Aww yeah, now we’re cooking… I’m cruising along, feeling fine, make a quick right turn into the uterus and then BAM!  Totally nailed by another sand tiger embryo! Right. In. The. Face.  I’m like “Where’d YOU come from” and he was like “You didn’t think your dad was the ONLY one nailing yo Mama did you? Oh wait, she’s my Mama too. Well never mind, you get the point. This here uterus is MINE”  And I was like “Yeah man, but don’t taste me bro!” and he was like “Can’t talk…eating”.  And then things went kinda dark. What’s up with that?

Not Quite the Shark that ate Esteban

But clause #11 of the rules states: “Colorful, romantic, fanciful, metaphorical, and otherwise distinctive and original names are especially appropriate. Such terminology adds to the richness and breadth of the nomenclature and yields a harvest of satisfaction for the user”.  Bingo.  I had it. Our new shark was dark, but with scattered light blotches.  It reminded me of the scene in The Life Aquatic with Steve Zissou where the elusive and deadly Jaguar Shark swam by Team Zissou’s submersible, un-illuminated, and you could see the dark body with the light spots as it swam by the observation windows. 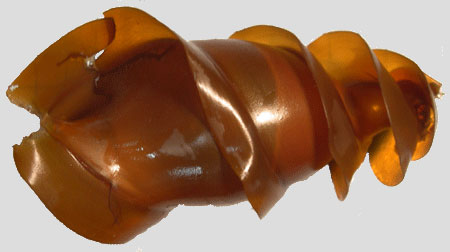 A murder of crows and a stipple of whale sharks?

Aggregation sounds boring. What should we call a massive grouping of whale sharks?

It’s a shark with two heads.  What else can you say? 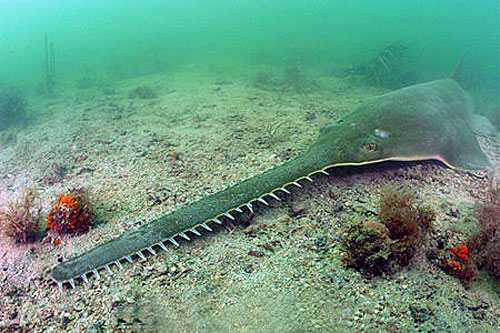 Exaltation to Extinction for Sawfishes

At first glance, a sawfish appears otherworldly, lifted from the pages of a Dr. Seuss book. One fish, two fish, blue fish, sawfish…there was a fish without a flaw but I was caught off guard by that saw. If one can get past the saw, used to unearth crustaceans from the mud for a tasty treat, one might notice their shark like body. A shark like body that can reach lengths of 23 feet. 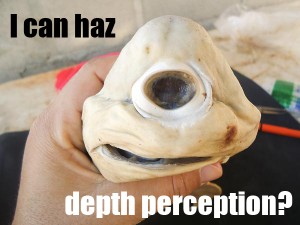 Why cyclops shark grabs at our imagination

Enrique Lucero León was fishing in the Gulf of California and caught himself a pregnant dusky shark.  Upon cutting her open, Enrique found several normal dusky shark embryos and one that stood apart from the others.  “Cyclops shark”, as he became known, was smaller than its siblings, pure white and with a single large eye right in the middle of the head, facing forwards.

Spotting the difference between whale sharks

The obvious approach with whale sharks is to use their inherent spottiness to scientific advantage, but how?  They’re just so…spotty.  Enter clever folks Zaven Azroumanian, Jason Holmberg and Dr. Brad Norman.  These three adapted some computer algorithms used to identify patterns of stars in the sky, in order to identify individual whale sharks based on the unique pattern of spots on their flanks.

A first look at the biochemistry of whale sharks

What story does blood chemistry tell?

Whale shark ecotourism: the good, the bad and the ugly

While it’s wonderful that people want to experience whale sharks first hand, these ecotourism industries are not without their challenges and in some cases they can develop problems so severe as to threaten the viability of the industries and sometimes even the whale sharks themselves.

How does fear drive a marine food web? That’s right I said fear, as in blood-curdling-scream-I-think-I-just-wet-my-pants fear. Sharks just swim around and intimidate the hell out of other animals. What if a utopia state existed where sharks weren’t invited and a society developed of peace, love, and understanding? What would that society look like?

I have to admit after being down in a sub and spending time looking at video feeds from ROV’s, the crazy animals I see from the deep start to become commonplace. That is why the below video is absolutely off the freakin’ hook! Drs. Eric Vetter and Jeff Drazen was in a submersible off the coast of Moloka’i when a 6-gill shark, at an estimated 17ft, swam within feet of the sub.


Sharks and lasers, not just for entertainment!

If there are people living within 200 klicks – any number of people – then there are effectively no sharks present.

The [first] documented attack on a living human by a cookiecutter shark, Isistius sp [is] quite an eye-opener.  Cookiecutters are relatively tiny sharks – just 2 feet long.  They don’t eat their prey whole, but take circular chunks out of their flesh, so their common name couldn’t be more apt.  Through a fortunate coincidence, [we have a chance to interview the] victim involved in the incident, marathon swimmer Michael Spalding.

Another Species With Forehead Sexual Organs

Chimaeras are sharks much cooler cousins.  They are not sharks, i.e. elasmobranchs, but rather a whole other subclass, Holocephali, that split from sharks nearly 400 mya…Much different from their toothy cousins, male chimaeras have retractable sexual appendages on their forehead… ‘They have this club on the top of their head with spikes. People think it’s used for mating. It’s like a little mace with little spikes and hooks and it fits into their forehead. It’s jointed and it comes out. We’re not sure if it is used to stimulate the female or hold the female closer.”

2 Replies to “Like Shark Week, But with Actual Facts”